Magical Evening To Be Taped For Future Television Broadcast 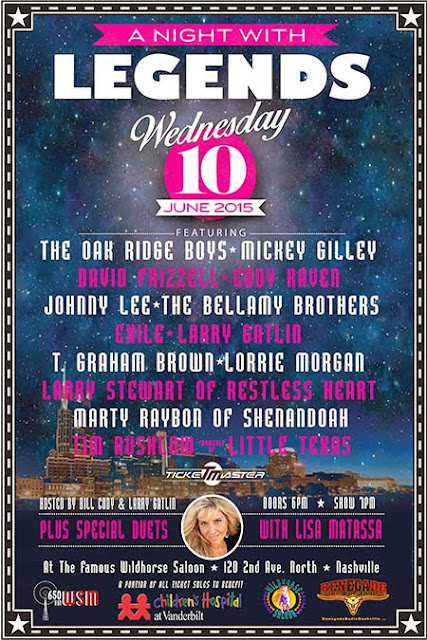 Talented Country songstress Lisa Matassa recently recorded an album of duets with these legendary artists. June 10, she will sing live duets with the entire roster of stars. Fans can expect to hear Lisa join with Lorrie Morgan on the 1989 smash “Out Of Your Shoes,” with Larry Gatlin on The Gatlin Brothers’ 1985 hit, “Sure Feels Like Love,” with The Oak Ridge Boys on their phenomenal twelfth #1, “Little Things,” with T. Graham Brown on fan favorite “I Tell It Like It Used To Be,” and with Exile on the group’s last #1, “I Can’t Get Close Enough.”

The magical evening of song will be taped for future television broadcast and benefits The Children's Hospital At Vanderbilt. Tickets are on sale now through TicketMaster outlets; prices range from $15 - $120 and include seating options from General Admission to Front Row. Doors open at 6 p.m. and the show begins at 7. The event’s Nashville radio partner is 650 AM WSM, while Renegade Radio Nashville will serve as the show’s official online radio partner. Bill Cody and Larry Gatlin are the event’s co-hosts.
Posted by LovinLyrics at 2:02 PM