THE NON-PROFIT, TASK FORCE DAGGER FOUNDATION, WILL USE $25,000 DONATION FROM ACM LIFTING LIVES® TO PROVIDE IMMEDIATE ASSISTANCE TO WOUNDED VETERANS 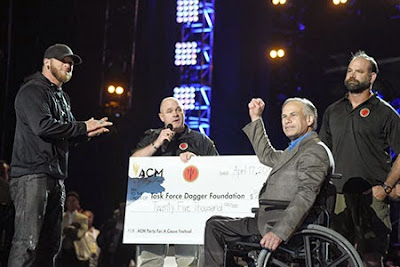 NASHVILLE, Tenn. (May 15, 2015) – Tonight, Friday, May 15 at 9 p.m. ET/PT on the CBS Television Network, ACM Presents: Superstar Duets two-hour special will bring some of country music’s brightest stars together on-stage for never-before-seen duet performances – the product of a two-day live event taping in Arlington, Texas leading up to the 50th Annual Academy of Country Music Awards. But what a lot of viewers don’t know, is that ticket proceeds from the live event went to support a great cause: ACM Lifting Lives®, the philanthropic arm of the Academy of Country Music®, and military philanthropies.

One of those military institutions was the 501(c)(3) non-profit, Task Force Dagger Foundation, which was presented a $25,000 check donation on stage at the April 18 taping in Arlington, Texas by country music star Brantley Gilbert and Texas Governor Greg Abbott. Task Force Dagger Foundation’s managing director, Keith David, (pictured, center) and Chuck Yerry (pictured, right) were on hand to accept the generous donation on the foundation’s behalf.

Board members of Task Force Dagger Foundation say they will use the contribution from ACM Lifting Lives® to fuel their primary mission and provide immediate financial assistance to wounded and ill soldiers and their families, as well as the families of fallen soldiers of The United States Army Special Operations Command.

“Task Force Dagger Foundation is very judicious in how we disburse our funds and we are working very diligently to ensure that where the money will go is where it is supposed to go: to soldiers and their families,” said Keith David. “We are honored and humbled by this generous gift from ACM Lifting Lives® and we look forward to witnessing improvement in the lives of those brave and heroic soldiers who've served our country as a result."

Operating since 2009, Task Force Dagger Foundation assists U.S. Army Special Operations Command (USASOC) soldiers and their families when a valid need is identified – either through the unit command, or through the SOCOM Care Coalition – with outreach programs and services classified in areas such as ‘immediate needs,’ ‘SOF Health Awareness,’ and ‘Recreational Therapy Events.’

Hannah Martin, manager of ACM Lifting Lives® said, “"ACM Lifting Lives® is proud to support Task Force Dagger Foundation as one of our military beneficiaries this year. We hope this donation makes a difference in the lives of wounded veterans that receive immediate assistance through the good work of this foundation.”

This isn't the first time Task Force Dagger Foundation has seen support from the country music community. The Journey Home Project, another non-profit organization deeply rooted in the country music industry, with country legend Charlie Daniels as its Chairman of The Board, and Daniels’ long-time manager, David Corlew as its co-founder, has been one of the biggest supporters of the mission of the Task Force Dagger Foundation.

“The Journey Home Project was founded to seek out and assist those veterans organizations that do the most good by matching them with donors,” said Daniels. “The Task Force Dagger Foundation is without a doubt, one of those worthy organizations that truly makes a difference in the lives of veterans.”

Find out more about the Task Force Dagger Foundation and how to get involved by visiting http://www.taskforcedagger.org.

For more information on ACM Lifting Lives®, visit http://www.acmliftinglives.org.
Posted by LovinLyrics at 10:40 AM