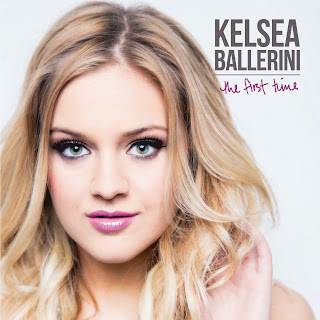 NASHVILLE, TN (May 18, 2015) – Black River Entertainment recording artist Kelsea Ballerini has been counting down to the release of her debut album THE FIRST TIME, today (5/18) and will celebrate this week with a national media blitz across several platforms, including performing her Top10-and-rising smash “Love Me Like You Mean It” (Ballerini, Whitehead, Kerr, Carpenter).

“I feel like I’ve been dreaming about, writing, and wishing for this day since I was twelve. To finally get these songs out to people, is really special and something that I’ve been excited about for a long time,” said Ballerini.

"This is a such special day for Kelsea and Black River," said Black River Entertainment CEO Gordon Kerr. "Over the last couple of years, we have been privileged to share in the development of Kelsea’s amazing songwriting talents and artistry. Today, the world gets to hear her heart and we couldn’t be more proud!"

To kick off release week, fans can celebrate with her when she returns to her hometown of Knoxville, TN, on Tuesday (5/19) for a special in-store appearance at Walmart (10900 Parkside Dr., Knoxville, TN) at 6PM EST. Then, she will jet off to NYC to make her national TV debut on NBC’s TODAY show on Thursday (5/21) beginning at 10AM in all time zones and take her performance to new heights at the top of The Empire State Building on Friday (5/22).

On stands now, the stunning singer-songwriter graces the cover of NASH Magazine. The story gives an inside look at Ballerini’s rise to becoming one of CMT’s Next Women of Country, her songwriting inspiration and the making of her debut album.

Newly crowned one of CMT’s Next Women of Country, Ballerini has been abuzz with recent shout-outs from Superstars Taylor Swift, Little Big Town, Kristian Bush and TODAY’s Hoda Kotb and landing on several 2015 “Ones to Watch” lists, including Billboard, Country Weekly, Rolling Stone Country, The Huffington Post, Radio.com, Spotify, #CMChat and more. Racking up the firsts, she scored her first-ever award show nomination for the 2015 CMT Music Awards Breakthrough Video of the Year (“Love Me Like You Mean It”). Airing live on CMT June 10 at 8/7 CT, fans can vote now at http://www.cmt.com/cmt-music-awards/vote/breakthrough-video-of-the-year.jhtml.

Currently, Ballerini is co-headlining CMT’s NEXT WOMEN OF COUNTRY Tour - the network’s first-ever ladies-only tour – and will also join select dates on Lady Antebellum’s WHEELS UP Tour throughout the summer.