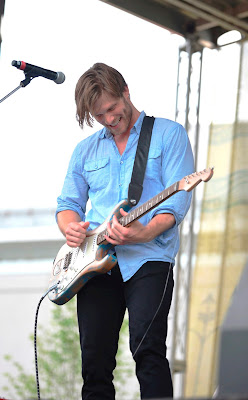 NASHVILLE, TN (June 19, 2015) – Last week was noteworthy for Chris Carmack, star of ABC’s hit series “Nashville,” as he made his CMA Music Festival debut and performed at two major fundraisers: the inaugural “Concert for Love and Acceptance,” co-sponsored by Ty Herndon and GLAAD and Craig Wiseman’s “Stars for Second Harvest.” By week’s end, the positive reviews of Carmack’s live show amassed, solidifying the established actor as a standout musician.

“Carmack showed a musical command and conviction in his set that outstrips what he has been able to transmit through the TV show and its soundtracks. There’s a built-in prejudice against actors jumping into music, but he deserves to be taken seriously.”
- BILLBOARD

“Two of the Top 10 Moments at the 2015 CMA Music Festival: “Chris Carmack at Belk Park Stage” and “The Concert for Love and Acceptance” – “Carmack]showed off his impressive vocal and guitar chops, ripping through his own originals, due out later this year on an EP, as well as a cover of the late B.B. King’s ‘Sweet Little Angel.’”
– BOSTON GLOBE 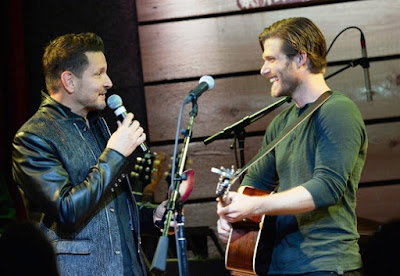 On June 12, Carmack joined co-hosts Ty Herndon and Meghan McCain for the inaugural “Concert for Love and Acceptance” in support of LGBT acceptance in the community. Prior to his set, Carmack was surprised on stage when he received the first-ever “RALY” (“Rescue A Life Y’all”) award for his influential work portraying “Will Lexington,” an afflicted gay country artist, on “Nashville.”

The following day (6/13), Carmack made his CMA Music Festival debut drawing a vast crowd. His set included the “Will Lexington” hit, “What If I Was Willing,” and originals from Carmack’s forthcoming EP, PIECES YOU, including the title track, “Being Alone” and “Holding My Breath.” As a fan and student of Jazz & Blues, he also performed a tribute to the late B.B. King, the legendary singer’s “Sweet Little Angel.” Watch a clip of the captivating performance here. During his set, he played an electric guitar he handmade and his treasured 1956 Martin d-28 acoustic guitar.

Carmack’s debut song “Being Alone,” is available now on iTunes. The passion-driven track will be featured on his forthcoming EP, PIECES OF YOU, written solely by Carmack and produced by GRAMMY Award-winner Ben Fowler (Lynyrd Skynyrd) and Phoenix Mendoza. Gearing up for the fourth season of “Nashville,” he has been featured on THE MUSIC OF NASHVILLE soundtracks in addition to performing on the 2014 and 2015 “Nashville” concert tours. ABC’s “Nashville” has received nominations for Golden Globe, Primetime Emmy, People’s Choice, Teen Choice and Critics’ Choice Television awards.

The Washington D.C. native, who grew playing saxophone at a young age, turned his attention towards jazz band and theatre in high school. Upon graduating, he studied at NYU’s esteemed Tisch Adler Conservatory before heading out to Los Angeles where he helped launch the theatrical production of “The Day I Stood Still.” Carmack would spend his off-time practicing guitar, which would later come in handy for his role on "Nashville." His performance in “The Day I Stood Still” attracted the attention of the producers from the hit drama “The O.C.,” who cast him as “Luke Ward” in the series in 2003. After completing his work on the show, Carmack returned to the stage in NY at the Roundabout Theatre Company, where he took on the role of “Sloane” in “Entertaining Mr. Sloane,” alongside Alec Baldwin and Jan Maxwell. He also performed in London, playing John Buchanan in Tennessee Williams’ “Summer and Smoke.”

For tour dates and more information visit facebook.com/chriscarmmackmusic and follow Chris Carmack on Twitter @RealCarmack.
Posted by LovinLyrics at 1:03 PM