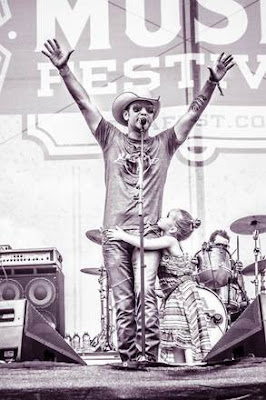 NASHVILLE, TN – (June 18, 2015) – Craig Campbell, RED BOW Records’ artist and father of two girls, was joined on stage by his youngest daughter Kinni Rose at the end of his CMA Festival Riverfront set on June 11. The previous day (6/10), his other daughter Preslee charmed on the red carpet at the CMT Music Awards as his date.  Later that night, she almost brought Lee Brice to tears when she sang “Happy Birthday” to him as seen here.

“My step father came into my life when I was seven years old. Thank God he did. He raised me in church, to respect others and to always do the right thing,” said Campbell in honor of his own father figure. “Everything I know about being a dad, I learned from him.”

Earlier this year in appreciation of his love for his family, Campbell tattooed sheet music from his debut single, “Family Man,” on his left arm: “The livin’, breathin’, reason that I am.”

Campbell launched on to the Country music scene with the release of his self-titled debut album (2011) delivering the hits “Family Man,” “Fish,” and “When I Get It.” To date, he has logged four consecutive charted hits with over a billion radio airplay audience impressions and over a half million downloads. Acclaimed as one of the genre's most neo-traditionalist singers, his Top 15 breakout debut “Family Man” was featured on HBO’s True Blood and the top-selling fan-favorite “Fish” has tallied nearly 400,000 digital copies sold. Most recently, Campbell earned his first Top 10 smash with the infectious “Keep Them Kisses Comin’” from his sophomore album NEVER REGRET (2013) produced by Keith Stegall (Alan Jackson, Zac Brown Band) and Matt Rovey (CCMA Album Of The Year Producer). The gifted songwriter co-penned six of the tracks on the twelve-song project as well as Garth Brooks "All American Kid" on MAN AGAINST THE MACHINE. Prior to landing his first record deal, the Lyons, GA native spent time on the road playing keyboard for both Tracy Byrd and Luke Bryan - shows that inspired him nightly. He was soon discovered while playing a regular gig at the downtown Nashville honky-tonk, The Stage.

For more information and tour dates, visit www.craigcampbell.tv.
Posted by LovinLyrics at 3:54 PM