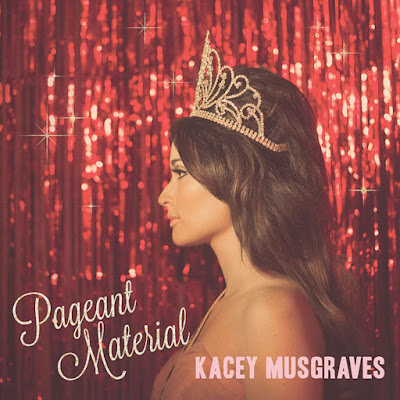 With the fast growing movement of women in country music, the release of Kacey Mugraves' long awaited sophomore album, "Pageant Material" is right on time. I think that everyone was expecting Kacey to go big on this CD, but instead on this new collection of music from one of country's "love it or hate it" artists, she went bigger in a small way. What you get isn't an "in your face" collection of songs, instead you get a more personal truth as Kacey decides to tell it in her own unique way. While mainstream radio may not readily accept her truth, music critics certainly have come to appreciate it.


This CD seems to be a little more subdued, yet still campy and brutally honest version of Kacey. One thing that you can always count one is her unique "lessons" like in "Follow Your Arrow." This album comes across as more of a soul searching expedition and one that says much more than the average ear who only listens to the surface thinks it does. These songs are reflective, they seem to be personal and she seems to be telling her story. Personally, while I was a big fan of her debut CD, I'm an even bigger fan of this one. Again, it's not gonna be something for everyone, but it is something that everyone who loves Kacey is going to appreciate and want to listen to on repeat.

Kacey is always gonna squeeze in at least one lyrical middle finger to society and the establishment. This CD has two fingers. The first single off of the CD, "Biscuits", is her ode to "just keep your nose in your own business." These days, that seems to apply so much more with social media and people always wanting to know who's doing what, what's going on and what everyone thinks. Who cares? Watch your own backyard and you might be surprised that it's not as green as freshly mowed as you thought. Now when someone sticks their nose all up where it shouldn't be, I'm simply gonna smile, think of hot homemade biscuits, point at them while I just say "gravy", laugh and walk away. There is another song on the CD that has personally made me love Kacey even more, "Good Ol' Boys Club." She makes it known that she's not interested in being a member of the same old same old, she'd rather do her own thing and not become a mold of someone else's idea of who she should be. She's far from the mold and if that's what's keeping her from being played on country radio, kudos to her because it just shows me that she's more about the integrity of crafting and performing music than standing in the spotlight and being the topic of everyone's gossip and conversation. This is what I love about Kacey, she doesn't write and release what others want her to write and release, she sticks to her guns and to her heart and writes what SHE wants. She controls her own creativity and if I could virtually high five her for it, I totally would. To me, she's like a female version of Johnny Cash, a stand out, someone who's known for her attitude and her music rather than simply an image. It's working because she's getting rave reviews on her music and now she can add another one to the list.

Posted by LovinLyrics at 7:44 PM