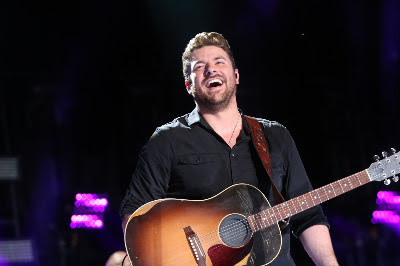 Nashville, TN – June 15, 2015 – Chris Young is fired up as he wraps a hugely successful week during CMA Music Festival.  The festivities started with a bang as he arrived on the CMT Awards Red Carpet in his very own 2012 Dodge Challenger, the same muscle car featured in his steamy new video, “I’m Comin’ Over.” The clip premiered earlier this month on the network and is quickly closing in on one million views as the single from his forthcoming fifth album continues to rocket up the radio and sales charts.

After celebrating his 30th birthday Friday, Young spent Saturday morning wowing the Fan Fair X crowd as the CMA Artist of the Day on the Close Up stage, where he performed and participated in a Q&A for fans.   The day kept getting better, as RCA Records Nashville surprised him with plaques commemorating milestone sales for three consecutive GOLD singles - “Aw Naw,” “Who I Am With You,” and “Lonely Eyes” - and a GOLD album certification for Neon.  To cap off the weekend, the star was elated to take the stage at LP Field in his hometown Saturday night, receiving a standing ovation from tens of thousands of country music fans from around the world.

Join the conversation with Chris Young’s more than 2.4 million followers on Facebook, Instagram and Twitter and get tickets to catch him on tour at www.chrisyoungcountry.com.
Posted by LovinLyrics at 4:50 PM