Brand-New Album, 'Meet Me In Bluesland', Debuts at No. 3 On Billboard Blues Chart 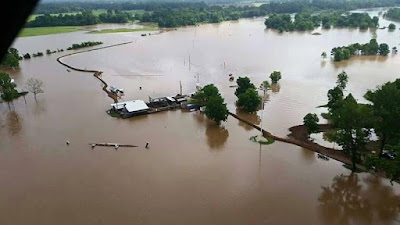 COLFAX, La. (June 15, 2015) – GRAMMY, CMA, and ACM winning southern rock group, The Kentucky Headhunters, whose name was coincidentally inspired by legendary blues musician Muddy Waters' band, the Headhunters, had only cancelled one show in 46 years of touring due to weather. But after heavy rain at the Louisiana Mudfest on Saturday, June 13, they were forced to make it two.

The Kentucky Headhunters were scheduled to perform a full concert in support of their new blues album, Meet Me In Bluesland, which debuted at No. 3 on the Billboard blues chart last week, at the 400-acre Colfax Mudfest Recreational Park in Colfax, Louisiana at 9 p.m CT. However, a severe rain and wind storm impacted the area, placing pressure on a temporary, private levee that had been built a few weeks prior in order to protect it from the rising Red River. Fearing for the safety of the audience and all involved, the band pulled the plug on the show and chose not to play.

"After the storm we made the decision not to take the stage, fearing for the safety of the audience, local help and our own crew and band," said Richard Young, The Kentucky Headhunters. "We just knew it was too big of a risk for the show to go on."

According to the Grant Parish Sheriff's Office at KABT-TV, at approximately 2 a.m. CT on Sunday, June 14, a sheriff's deputy noticed that the levee was cracking, and began moving concert-goers to higher ground. Within minutes, the levee was breached and the MudFest grounds were severely flooded.

Though most concert-goers and crew members had gotten to higher ground, 113 people had to be rescued from the floodwaters. The Associated Press reports that wildlife agents, troopers and sheriff's deputies used boats to rescue people, while Louisiana Army National Guard soldiers flew overhead to bring everyone to safety. No fatalities or injuries have been reported, according to KALB-TV.

"Thank the Lord that most people had gone by the time the levee was breached," Young said. We want to thank the promoter, the audience and all the other bands and crews for what was set to be a wonderful day of music and fun in the mud."

"God had a backstage pass to this show," he added.

The Kentucky Headhunters' new album featuring Johnnie Johnson, Meet Me In Bluesland, hit stores on June 2 and is holding strong at No. 3 on the Billboard Blues chart. Check it out on iTunes, Amazon and other locations where music is sold.

The band is currently on tour, performing over 80 dates throughout the United States in 2015.

For a full list of upcoming dates, visit www.kentuckyheadhunters.net.
Posted by LovinLyrics at 5:26 PM