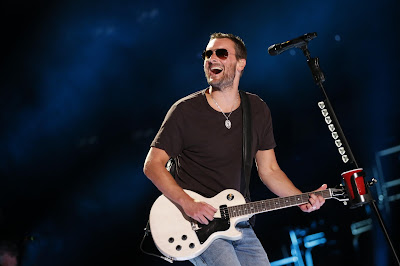 NASHVILLE, Tenn. -- (June 8, 2015) -- Eric Church has been on the road the majority of the year with his record-breaking “The Outsiders World Tour” which was ranked No. 1 on Billboard’s Hot Tours, but he will return to Nashville this week to thank the fans that have supported him since he debuted his first music at CMA Music Festival in 2006.

Nominated for Male Video of the Year for his No. 1 hit “Talladega” from his Platinum-certified album The Outsiders, Church will kick-off his week performing live on “The 2015 CMT Music Awards” on Wednesday, June 10.

Immediately following the CMT Awards, the CMA and ACM Award winner will move across the city to the mother church of country music, the Ryman Auditorium, and perform as part of “Marty Stuart’s 14th Annual Late Night Jam.”

Church will leave Nashville for tour stops in Orange Beach, AL at the Amphitheater on The Wharf on June 12 and to join Kenny Chesney’s “The Big Revival Tour” at the Georgia Dome in Atlanta, GA on June 13.

But the top selling country music artist of 2014 will then travel home to Music City for Sunday, June 14, where he will perform at LP Field as part of the final Nightly Concert at CMA Music Festival.  The singer/songwriter will hold his Church Choir Party that day as well at a private location that will only be revealed to select raffle-winning members of his fan club.

Church and his team will also open a pop-up store, coined "The Outsider's Joint", in East Nashville, the heart of the creative underground Wednesday June 10, 2015 through Friday June 12, 2015 from 10AM to 5PM. For the first time, his custom Lucchese boot line will be available to the public (previously only available to VIP ticketholders on his tour). There will also be many rare and unique items for fans to buy personally chosen by the man Spin Magazine called “The Last Honesty Rock Star.” Proceeds from specialty items (not including the Lucchese boots) will benefit the Chief Cares Fund, a 501c3 non-profit organized by Church and his wife Katherine that serves over 2.5 million people around the globe with charitable giving. For more information on Chief Cares Fund, visit http://www.ericchurch.com/chiefcares.

Church will resume “The Outsiders World Tour” on June 20 at the Black Diamond-Harley Davidson in Marion, IL.  For a full list of tour dates, visit www.EricChurch.com.
Posted by LovinLyrics at 7:40 PM