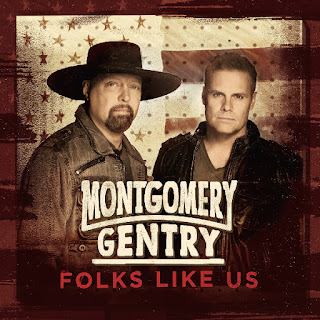 Nashville, TN - June 8, 2015 – Montgomery Gentry, one of country music’s most storied duos, are hours away from the release of their new album, Folks Like Us. Produced by Michael Knox (Jason Aldean, Thomas Rhett), this is the pair’s first record in over three years and first with Blaster Records. The video for the album’s new single and title track is currently airing on CMT, CMT Pure Country and Great American Country.

“I know every artist thinks their latest album is the best thing they’ve ever done, but Eddie and I really feel that this might be our best work,” offers Gentry.  "It immediately feels like a Montgomery Gentry record, but I don’t think we’ve ever had this many truly incredible songs to work with.  We know each other so well at this point and Michael Knox just understands us.   Every song is something we can relate to on some level, big or small.  Maybe that’s what makes this record so strong to us.”

Eddie and Troy are getting geared up for a busy street week with multiple autograph sessions, concert performances and exclusive premieres for faithful fans.

Get your copy of Folks Like Us, the new album from Montgomery Gentry.

ZUUS goes “On The Set” with Montgomery Gentry for their new video, “Folks Like Us” – check out the sneak peak HERE and stay tuned for the full behind-the-scenes live on Tuesday.

Live in Nashville from The Highway studios for “Mornings with Storme Warren” on Sirius XM.

Signing copies of their new CD, Folks Like Us, at the Opry Originals store and Country Music Hall of Fame in downtown Nashville.

Posted by LovinLyrics at 8:05 PM