GET TO KNOW OUR JUNE FEATURE ARTIST OF THE MONTH: JUSTIN ANDERSON 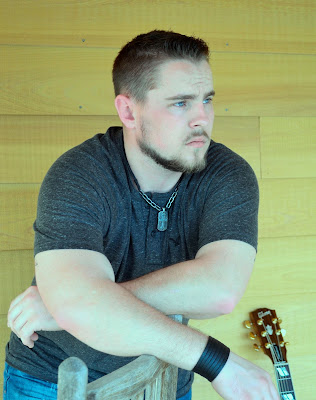 Justin may not have picked up a guitar until a later age but his desire to perform music began at a very young age listening to the radio. With a general love of music, you could always find Justin singing along to artists from the country twang of Clay Walker and Tracy Lawrence to the hip hop beats of artists such as Usher. Even though his musical preferences are widespread, his heart always comes back to country and it's legends like Waylon and Willie.

Check out our Q & A session with Justin and learn a little more about him from his own point of view:

Lovin' Lyrics: Tell us a little about yourself, a little background on your upbringing and how you discovered you had a love for music.

Justin Anderson: Well I'm just an average guy living a crazy dream. I'm from a small town with one stop light. I'm 26 years old and have a 3 year old son that I just can't get enough of. I've only been a musician for going on 3 years. I have always been somewhat of a singer. I got laid off from a job one time and decided to learn how to play the guitar. Then it went from playing bonfires, then small smokey bars, now to playing some great venues all over the place.

Lovin' Lyrics: What was your first really memorable live performance?

Justin Anderson:  I've had several of those. I would have to say that this past Friday night at The Boathouse in Myrtle Beach will go down as the most memorable. After two years of solo gigging and two failed attempts at a band, I finally found a great group of guys. I've opened up for several acts for over a year at the boathouse and this last Friday I finally got to headline. It was an amazing show with so much energy. We were scheduled for one 2 hour set and ended up playing almost 3 hours ha ha!

Lovin' Lyrics: If you had to describe yourself as an artist, how would you do so?

Justin Anderson: I would describe myself as the energizer bunny artist ha ha! I'm full of energy on the stage. I work the crowd like no other and that to me is what it's all about.

Lovin' Lyrics: As a new artist, what is the hardest thing you're finding about getting your music heard?

Justin Anderson: Exactly what you said, being a new artist. As a new artist it's hard to get your music out because nobody other than your hometown and few surrounding areas know you. Social media helps a lot but getting out booking shows is the best way to me

Lovin' Lyrics: To date, what's been your "biggest break?"

Justin Anderson: My biggest break would definitely have to be the release of my EP on April 21, 2015. Up until then I didn't realize how serious this music thing was going to be. Things really took off for me and hasn't slowed down. Hopefully it won't either.

Lovin' Lyrics: You just released your debut EP, "Overdrive", which was debuted at  #15 on the iTunes country charts and is currently breaking into the Billboard charts. Tell us a little about the music on the EP. Did you write the songs?

Justin Anderson: We were in total shock that a guy like me reached #15. Someone who had never released any music, or didn't really have a name for myself. I'm very happy with the songs on the EP.  Somehow I managed to write "One Last Call" I'm not much of a song writer but I'm proud of that one. My buddies Waylon Owings and Casey Joe Kelly of Outshyne wrote "With Me Tonight" with my buddy David Adam Byrnes. It's a fan favorite. The title track "Overdrive" was written by one of the producers, Garret Parris and Charlie Grantham of Crossin Dixon. These two guys also wrote "Right Where She Wants Me" along side of Brandon Hyde. The EP was produced by Garret Parris and my manager Jimmy Milliken 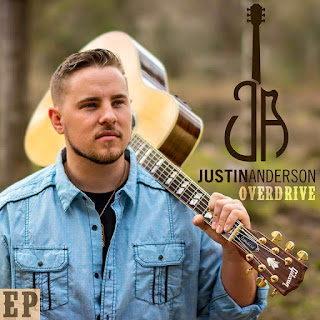 Purchase "Overdrive" on iTunes. Don't forget to leave a review!

Lovin' Lyrics: What's next on your agenda?

Justin Anderson:  Next is to get out and play. I've been tied down to SC due to being a solo acoustic act.  Like I said earlier, I finally found an amazing group of guys that are crazy talented and I'm excited to hit the road with my brothers.

Lovin' Lyrics:What artist would you most like to tour with?

Justin Anderson: Aw man they're several. I'd have to go with my boy Jon Pardi. I had the chance to open for him back in April. I'm a huge fan of his music. He has his own style and is doing a great job at keeping it as traditional as he can.

Lovin' Lyrics: What advice would you pass on to other new artists that's been important in your own struggles?

Justin Anderson: My advice is to never give up. Never slow down because once you slow down you have to work twice as hard to catch up. Don't listen to the critics. Someone is always gonna judge you rather it's good or bad. Let the bad judgment be motivation.

Lovin' Lyrics: How can fans connect with you on social media?