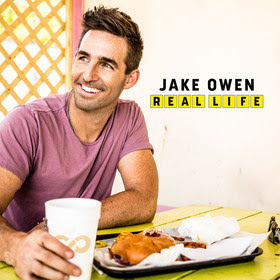 Taking the song to another “real” level, Owen will make the national TV debut performance of the catchy single at the upcoming 2015 CMT Music Awards, airing live on CMT tomorrow, Wednesday June 10 at 8/7 CT.

Released to rave reviews, including USA Today’s “Song of the Week,” "Real Life" (Ross Copperman, Shane McAnally, Ashley Gorley and Josh Osborne) is the first single from his forthcoming fifth studio album on RCA Nashville due out later this year. “Real Life” is now available here and sets the playful, boundary-pushing tone for the project.

Fans can catch the dapper vocalist performing “Real Life” live on Kenny Chesney’s 2015 THE BIG REVIVAL Tour throughout the summer.

Owen ascended to stardom with five #1 smashes - the 2X PLATINUM anthem “Barefoot Blue Jean Night,” PLATINUM-certified hits “Beachin’,” “Anywhere with You,” “Alone with You,” “The One That Got Away” and the critically acclaimed “What We Ain’t Got.” Previously taking home ACA and ACM Awards, the Vero Beach, FL, native has earned GRAMMY and TEEN CHOICE Awards nominations.

“Real Life” is now available via this link: http://smarturl.it/joreallife

Posted by LovinLyrics at 4:13 PM