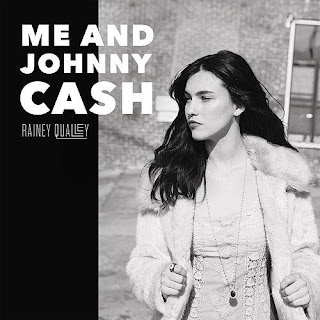 (Nashville, Tennessee...) --- Cingle Records' flagship artist Rainey Qualley turned heads with her "Turn Me On Like The Radio" music video, and CMT is now set for a worldwide premiere of her latest visual offering, "Me And Johnny Cash," across multiple platforms beginning Wednesday, July 1, 2015. Rainey again enlisted Erica Dasher to direct the clip, which will be available on CMT Pure, CMT.com, CMT Artists app and on-demand.

"Erica and I have the same quirky sense of humor," said Rainey. "We all had way too much fun making this video, and I hope that comes across when people see it."

The clip opens with a cheerful Rainey pulling into a remote gas station. She opens her trunk to make sure her former lover is safely tied up before going in to make her purchases. Two officers assist her, after she innocently but intentionally breaks a bottle of wine in the store. The tongue-in-cheek clip shows men tied up in various areas in and around her home - the pool, at the grill and in bed. The message: You know what they say about a woman scorned.

Dasher, whose credits as a producer, writer and director include the documentaries
This Is Not A Crib and Speak Easy and the short film Wave, also directed Rainey's "Turn Me On Like The Radio" music video.

Rainey's debut EP, Turn Down The Lights, was released earlier this month. The Asheville, NC native co-wrote all seven songs on the collection, which was produced by Russ Zavitson and John Ramey. Her debut single, "Me And Johnny Cash," is receiving significant airplay at country radio, and noted music critic Robert K. Oermann had this to say in his recent Music Row Magazine review:

"Similarly, no one even touched the hem of Rainey Qualley's gown as she swept up to the podium as this week'sDisCovery Award winner. Her 'Me and Johnny Cash' rocks in all the right places. This puts pedal to the metal and boasts a delicious backbeat, plus stuttering fiddle and banjo, deep-twang guitar and a wailing, wide-open vocal. A highway song for a red-hot summer. This is going places."

Rainey began making trips to Nashville to pursue songwriting but quickly embraced her desire to entertain. Booking powerhouse CAA signed Rainey earlier this year, and her first dates were opening for her hero Willie Nelson's two sold-out shows at the famed Ryman Auditorium. SirusXM's The Highway added her song, "Turn Me On Like The Radio," as a "Highway Find," and it rose to #17 on their countdown.

Born in New York, NY, Rainey's family moved to Missoula, Montana when she was two and then to Asheville, North Carolina seven years later. Rainey always loved the performing arts and was a passionate participant in school plays, dance competitions, and choirs throughout her childhood. She credits dance for giving her an appreciation for a wide variety of music genres and styles. Between dance, the music her father listened to at home and in his own bands and her own eclectic tastes, she lists Johnny Cash, Dolly Parton, Loretta Lynn, Sam Hunt, Hozier, Otis Redding, Etta James, The Temptations and others among her diverse music taste.

Posted by LovinLyrics at 3:21 PM