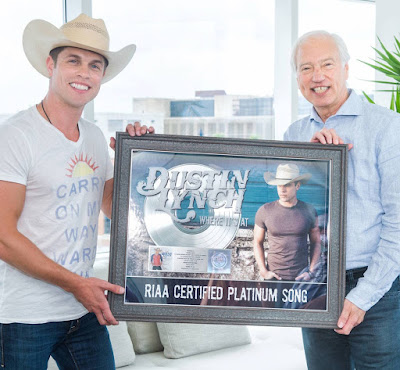 WASHINGTON, DC - (June 29, 2015) – Chart-topping Broken Bow recording artist Dustin Lynch was surprised by the RIAA on Friday afternoon (6/26) with a PLATINUM plaque certifying ONE MILLION in sales and streams for his multi-week #1 single “Where It’s At.”

Lynch served as a special guest panelist alongside RIAA Chairman & CEO Cary Sherman and Broken Bow VP of Promotion Lee Adams for the first "RIAA Live" event of summer 2015 at its D.C. headquarters. The audience - consisting of music industry and political tastemakers - was also treated to an acoustic performance by Lynch, including hits “Where It’s At,” “Cowboys And Angels” and latest “Hell Of A Night.”

After Lynch’s performance, Sherman stepped onstage to present him with an official RIAA-certified plaque for his #1 single “Where It’s At,” the title track of his sophomore album.

"What a dream come true!" shared Lynch. "I have an incredible team of people that believe in me and my music and work so hard and spend time away from their families...this is theirs as much as mine. Big thanks to everyone at country radio that believed in this song and chapter 2 of my music!"

“Where It’s At” marks the second RIAA-certified PLATINUM single for the talented artist who was previously honored for his debut hit “Cowboys And Angels.”

Lynch’s current single “Hell Of A Night” rocketed into the Top 15 today at Country Radio. Noted by popular website Buzzfeed as one of its “Songs You Need In Your Life…,” the scorching tune has already earned 16 million plus streams on Spotify.

Since releasing his PLATINUM debut single “Cowboys And Angels,” Lynch has launched on to the country music scene. Racking up over 30 million views on YouTube/VEVO, soaring to #1 on the MTV Music Meter and selling over 2.5 million digital singles, he brings a fresh combination of traditional influences and edgy intensity to the genre. Producers Mickey Jack Cones, Brett Beavers and Luke Wooten showcase his progressive sound throughout his latest album, WHERE IT’S AT, which debuted at #1 on the iTunes Country Albums Chart upon release and has tallied over 950,000 tracks sold to date.

The rising star is currently igniting crowds nationwide on Luke Bryan’s 2015 KICK THE DUST UP Tour with additional tour stops at major festivals and headline club dates throughout the summer.

Lynch’s WHERE IT’S AT is now available on iTunes.
Posted by LovinLyrics at 7:02 PM