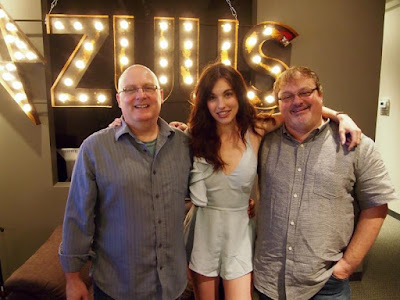 (Nashville, Tennessee...) -- Rainey Qualley recently staged a ZUUS Country takeover, and her "On The Rise" segment is scheduled to air Monday, June 29 at 7:00pm, Tuesday, June 30 at 10:00am and 10:00pm and Friday, July 2 at 8:00pm - all times Eastern. Her "Live From The Couch" performance of select songs from her Turn Down The Lights EP will air on the ZUUS.com channel of the same name. Fans can catch a sneak peek of her performance of her new single, "Me And Johnny Cash," on ZUUS.com here.

"We had an absolute blast at ZUUS, and I can't thank them enough for their support," said Rainey. "I hope everyone will check out my #OnTheRise segment."

Rainey opened for one of her childhood heroes, Loretta Lynn, Friday night at Kirby Theater in Wilkes-Barre, PA. She will be visiting radio stations throughout the south this week and heading out west for station visits next week.

Rainey's debut EP, Turn Down The Lights, was released earlier this month. The Asheville, NC native co-wrote all seven songs on the collection, which was produced by Russ Zavitson and John Ramey. Her debut single, "Me And Johnny Cash," is receiving significant airplay at country radio.

Born in New York, NY, Rainey's family moved to Missoula, Montana when she was two and then to Asheville, North Carolina seven years later. Rainey always loved the performing arts and was a passionate participant in school plays, dance competitions, and choirs throughout her childhood. She credits dance for giving her an appreciation for a wide variety of music genres and styles. Between dance, the music her father listened to at home and in his own bands and her own eclectic tastes, she lists Johnny Cash, Dolly Parton, Sam Hunt, Hozier, Otis Redding, Etta James, The Temptations and others among her diverse music taste.

Posted by LovinLyrics at 7:14 PM