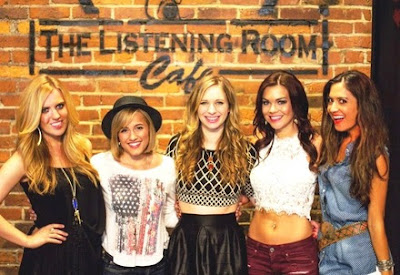 “I started this event last year as a way to really showcase some of the incredibly talented females in Country music,” said Olivia. “It was so popular last year that we brought it back again this year. I couldn't wait to bring all these beautiful voices together for a second year."

Fittingly, Olivia’s song “You Part 2” was the most-added single by a female at Country radio last week (6/8). She co-wrote the feisty, female-empowerment break-up song with producer/musician/songwriter Ilya Toshinskiy and Danny Myrick (Jason Aldean, Tim McGraw). Recently, the newcomer was selected as one of only five emerging Country acts for the Top 25 Macy’s iHeartRadio Rising Star artists and she released the sassy, fun lyric video for “You Part 2.”

Previously opening for Wynonna Judd, Frankie Ballard and Randy Houser, this summer the songstress can be seen performing throughout the country including dates with Easton Corbin and RaeLynn. In the fall, Olivia joins Trace Adkins, Neal McCoy, Joe Nichols, Charlie Worsham and many others for the weeklong “Country Cruising” voyage departing from Miami, FL, on October 23.

The talented singer is working on new music with producer/musician Ilya Toshinskiy, and is writing with some of Nashville’s top tunesmiths including Jim Beavers (Dierks Bentley, “Sideways” and Luke Bryan, “Drink A Beer”) Catt Gravitt (Jake Owen, “Alone With You” and Jana Kramer, “Why Ya Wanna”) and Danny Myrick (Jason Aldean, “She’s Country” and Tim McGraw, “Truck Yeah”). Since releasing her debut single “Steal Me Away,” Olivia has garnered national attention and was named in Country Weekly’s 2015’s Who’s New feature. The fresh-faced newcomer made the move to Nashville, TN, over a year ago to pursue music, eagerly following in the footsteps of her mother who was a Country singer. Ever since she can remember, the 23-year-old has been immersed in the craft and tradition of Country music and knew that Music City was where she would land after graduating from USC with a focus in music, songwriting and acting.

Posted by LovinLyrics at 4:56 PM