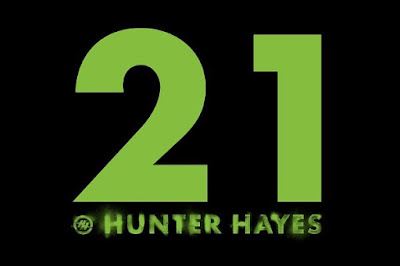 Breaux Bridge, Louisiana native Hunter Hayes is back at it again, and possibly better than ever with his newest single “21.” The song, which is his first single off of his much anticipated third studio album, is without a doubt going to be a chart topper. It’s the type of song that grabs you from the beginning with a catchy beat and lyrics that everyone at some point in their lives has felt. There’s no doubt that this is going to be another carefree party song, but it is something that hasn’t been heard too much from Hunter. There’s something about it that makes it stand out from every other party song out there. It’s almost like the writers of this song tapped into the minds of just about everyone and wrote a song about what they saw. Every now and then, for absolutely no reason at all (or maybe because it’s your birthday) you need to just let loose, go crazy, and have the best night of your life, kind of like on the day you turned 21. When Hunter sings “We go big or we go back home/ People looking at us like were losing it, losing/ But, baby, we ain't doing nothing wrong,” you feel an instant connection to the song. Although Storyline, his sophomore album, was very well received by his fans and critics, it didn’t receive as much radio recognition as you would have thought. If the rest of his upcoming album is anything like this song, something tells me were going to be hearing a lot more of Hunter playing on our radios.

Posted by LovinLyrics at 9:23 AM