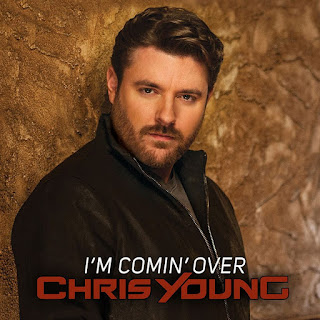 Chris Young’s newest single “I’m Comin’ Over” is a break-up not quite broken up song.  Young has previously been done for songs such “Voices” “Aw Naw” “Gettin’ You Home (The Black Dress Song.)  A song wherein he can’t hold in the passion he still feels for his ex-paramour, on the phone to her he discovers they’re both lonely and aching for one another.  Disregarding traffic laws and closure, he tells her “I'm comin' over, runnin' every red light, to hell with the closure - save it for another time.” Young croons about the on-again off-again relationship they can’t seem to escape when they had said good-bye and agreed they were better without one another but alas, he queries “Why put out a fire when it’s still burnin’?”  Young’s baritone growls through the speakers, a lustful serenade we can’t get enough of.  Tangled up in one another, with no chance of being extricated he starts off warbling


“We say “goodbye, see you around"
We turn our backs then turn back around
We break up, we make up, and we make love
We can't seem to let go, girl”

As the story builds, so does the passion in Young’s voice and the guitars in the background.  This newest song of his is sure to steam pouring out of the speakers everywhere it’s played.

The video will make you wanna smoke a cigarette afterwards even if you're a nonsmoker. This is a hot one.