I'll be contacting the winners directly for their mailing information! Thanks for helping us ‪#‎CelebrateSuccess‬! 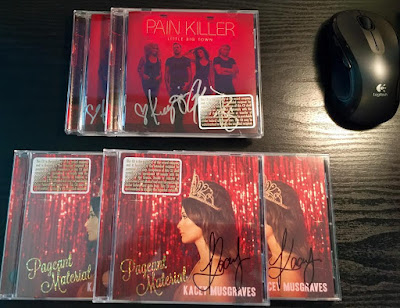 We're celebrating the success of Little Big Town and Kacey Musgraves with a chance to win a signed copy of their latest CD's, "Pain Killer" and "Pageant Material".

Little Big Town made country music history last week with their controversial single "Girl Crush" being in the #1 position for the most consective weeks, eleven! After much heated debate as to the meaning behind the song, the song soared and is now a record breaking beast!

Kacey Musgraves is one of few artists to make such a huge impact of country music right out of the gate. Having written several hits for other artists, she made a name for herself with her debut CD, "Same Trailer Different Park" and caused a stir with songs such as "Follow Your Arrow" and "Blowin' Smoke". Her follow up release, "Pageant Material" is a more toned down collection of songs that discuss small town life and it seems to be more personal this time around.

Tweet us at @lovinlyrics letting us know which you want to win and hashtag #CelebrateSuccess.

Good luck and thank you for supporting both of these great artists!