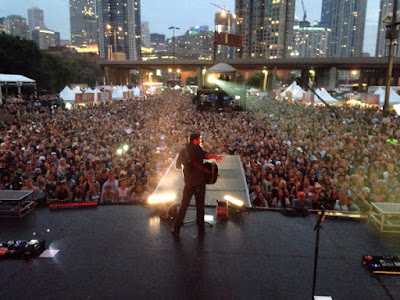 July 13, 2015…Nashville, TN…Chris Young, “one of the strongest, most distinctive voices among country’s current crop” (Billboard), cranked up Chicago over the weekend as he headlined Saturday’s Windy City Smokeout.  More than 12,500 people crowded downtown Chicago, the festival’s largest audience to-date, as Young delivered a hit-packed set with fan favorites including “Tomorrow,” “Aw Naw,” “Voices,” “Who I Am With You” and “Lonely Eyes” plus new smash, “I’m Comin’ Over.”

At the age of 30, Chris Young has accomplished more than some artists do in a lifetime. Already a Grammy-nominated vocalist, he’s also a dynamic live performer who plays a powerhouse show packed with hits, including chart toppers “Gettin’ You Home,” “Voices,” “Tomorrow,” and  “Who I Am With You.” With four albums to his credit, Young has amassed six #1 singles, seven Gold/Platinum certifications and performed for audiences ranging from Good Morning America to Australia and Dublin to The Late Show with David Letterman. The RCA Records artist is an international ambassador for his genre, a talented songwriter, and a southern gentleman who is frequently declared one of country music’s sexiest men by People and Country Weekly magazines.  With the release of his most recent record, “I’m Comin’ Over” from his highly anticipated fifth studio album, Young is just as well known for his classic baritone as he is for melt-your-heart ballads and is winning audiences across the globe. Join the conversation with Chris Young’s more than 2.5 million followers on Facebook, Instagram and Twitter and get tickets to catch him on tour at www.chrisyoungcountry.com.

Posted by LovinLyrics at 2:16 PM