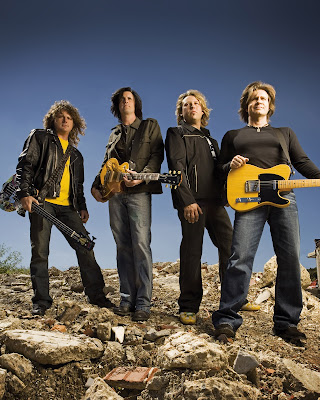 Country rockers Little Texas will hit the road in the coming months to support their latest studio album, Young For A Long Time. Since the album hit the streets in April, it's been creating a lot of buzz for the veteran group, and fans are excited about the tour.

"The songs on Young For A Long Time really reflect life in a lot of the places we visit,” said Little Texas member Duane Propes. "We're enjoying bringing this record to life onstage and listening to the reactions from both longtime fans and the new generation that are just discovering the band.”

Those journeys are what led the band to recently record “Slow Ride Home,” about the return of a fallen soldier to his Kansas hometown. The song—and the video that followed—were inspired when the band’s bus passed through miles of individuals lining the streets outside of Hayes, KS, where the soldier was from. “Slow Ride Home” was included on the band’s April 2015 release, Young For A Long Time.

Fans know Little Texas from the group’s more than 25 years of musical history, including 22 charting singles from the band’s ten albums. Little Texas reunited in 2004 after a hiatus, with original members Del Gray, Porter Howell, and Dwayne O'Brien joining Propes.

Up-to-date tour dates include stops in:

Buyers love Little Texas, and the band received high praise from promoters around the country for their high-energy, fan-pleasing shows. Time and again, Little Texas proves they have what it takes to rock country. Booking Entertainment’s Alan Frausini says Little Texas rocks, adding, "They are great guys to work with and really know how to entertain a crowd. I would recommend them to any client looking for an affordable headline act.” And RMA Entertainment’s Rick Modisett calls Little Texas, “the best in the business. Period!”

"They brought a very large ‘dead’ crowd with little personality to a great, fun-having crowd where everybody in the place was having a great time!” Modisett says. "By the end of the show people were up dancing, coming up standing by stage…just a great time! Little Texas is one of the best. I’d put them at the top of my list any day!!”

With the release of Young For A Long Time, Little Texas is poised to become more popular than ever. The new record received critical praise when it was released in April. Onestop Country commended Little Texas for their enduring crossover appeal, writing, “Their new album Young For A Long Time keeps the vocals key as they retain a modernized version of their signature sound. Their catchiness sits in the tempo driven songs that get you moving as they do with the title track ‘Young For A Long Time,’ the guitar riff laden ‘Why I Brought My Boots,’ the summertime sing-a-long ‘Yeah Yeah Yeah,’ and ‘Rednecks Do Exist,’ the latter which pokes some fun at the stereotypes of the south as they sing of seeing UFOs, going out muddin’ and hunting, and having bonfires.”

A complete track list of Young For A Long Time is as follows:

For more information and to stay up to date on Little Texas and their tour, visit littletexasonline.com.

Posted by LovinLyrics at 4:14 PM