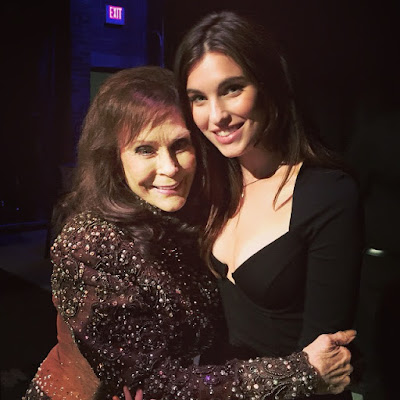 Cingle Records' flagship artist Rainey Qualley recently had another dream come true, when she opened for one of her musical idols, Loretta Lynn, at the Kirby Theater in Wilkes-Barre, PA.

CMT last week premiered the music video for Rainey's debut single, "Me And Johnny Cash," across multiple platforms. The clip is available on CMT Pure, CMT.com, CMT Artists app and on-demand. ZUUS Country also added the clip after airing a series of interviews and performances on "Live From the Couch" and "On The Rise."

Rainey's debut EP, Turn Down The Lights, was released last month. The Asheville, NC native co-wrote all seven songs on the collection, which was produced by Russ Zavitson and John Ramey. Her debut single, "Me And Johnny Cash," is receiving significant airplay at country radio, and noted music critic Robert K. Oermann had this to say in his recent Music Row Magazine review:

"Similarly, no one even touched the hem of Rainey Qualley's gown as she swept up to the podium as this week's DisCovery Award winner. Her 'Me and Johnny Cash' rocks in all the right places. This puts pedal to the metal and boasts a delicious backbeat, plus stuttering fiddle and banjo, deep-twang guitar and a wailing, wide-open vocal. A highway song for a red-hot summer. This is going places."

Photo: Beverly Miller
Posted by LovinLyrics at 10:42 AM