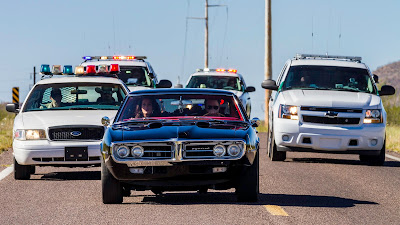 Fans across the globe will want to tune in to CMT Hot 20 Countdown and CMT platforms including CMT.com and the CMT Artists App starting Saturday, August 1, as the scintillating new video for Randy Houser’s current single “We Went,” makes its weekend-long exclusive premiere. The Dustin Rikert-directed piece tells the story of the “Good Deed Bandits,” putting a Bonnie-and-Clyde-meet-Robin-Hood spin on an action-adventure chassis. Houser has garnered rave reviews for his “soulful delivery and the unrelenting arrangement” (Taste of Country) of the song, and recent live performances have inspired Billboard to proclaim “there is no reason that Houser shouldn’t receive some consideration for male vocalist of the year from the CMA and ACM. He’s simply that damn good.”

Paced by a string of vintage hot rods, the video races as fast as the song itself, which Rolling Stone Country called “a galloping road anthem,” astutely noting that “‘We Went’ finds Houser once again playing the role of a love-struck outlaw so vividly that it feels like a mini-movie. With a churning, you-and-me-against-the-world storyline and a thumping beat, Houser's tongue-twisting tale (his delivery is the essence of rapid-fire) follows a couple of modern-day Bonnie and Clydes as they lead police on a wild chase.”

And they do just that as Houser and his love interest in the video – whom viewers first met in the seven-minute epic for his Top 5 smash, “Like A Cowboy,” also helmed by Rikert -- take down a drug baron and distribute his ill-gotten gain to down-on-their-luck folks as they race around the Arizona desert. The video was shot in Tucson and the picturesque towns of Huachuca City and Sierra Vista in Cochise County earlier this summer. Veteran actor William Shockley, who also appeared in “Like A Cowboy,” lends his skills to create another colorful character in the new music video.

“We had such a blast with the ‘Like A Cowboy’ video and the production on that one was so high-quality that we wanted to do it again for this one,” said Houser. “But this time, my whole band got to be in the video and there's a lot more action – everything from car chases to crash scenes to explosions. We just had a great time with it.”

“We Went” is the first taste of music from Houser’s forthcoming album, which will be his second for Stoney Creek Records and fourth studio album overall. Fans can hear new material like “We Went” out on the road this summer as Houser continues with Luke Bryan on the Kick the Dust Up Tour and plays select headlining shows and fair dates. For more information and the latest updates, visit www.RandyHouser.com or www.Facebook.com/RandyHouser and follow @RandyHouser on Twitter.
Posted by LovinLyrics at 11:16 AM