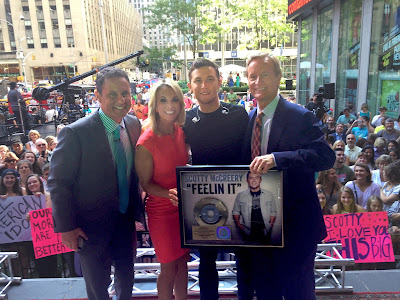 As part of the All-American Summer Concert Series, “FOX & Friends” hosts Steve Doocy, Elisabeth Hasselbeck, and Brian Kilmeade presented McCreery with an RIAA-certified Gold Single plaque representing more than half a million sales and streams of his recent Top Ten Hit “Feelin’ It,” written by Frank Rogers and Matthew West. This is the singer/songwriter’s latest RIAA-certified single, having already earned three Platinum certifications for his singles “I Love You This Big,” “The Trouble with Girls,” and “See You Tonight.”

“What a way to start the morning by debuting my new single and then receiving a Gold record for ‘Feelin’ It’,” said an excited McCreery. “I have the greatest fans in the world and I thank them for supporting me and my music. I hope they will love ‘Southern Belle’ just as much!”

This summer, McCreery is featured in Fandango.com's "I Love Movies" original video series. Watch him talk about his favorite movie, "Miracle," here. He is also on the road throughout the summer, both on his own and as the special guest on the Rascal Flatts RIOT 2015 Tour. Visit ScottyMcCreery.com for tour dates and ticket information.

Posted by LovinLyrics at 4:37 PM