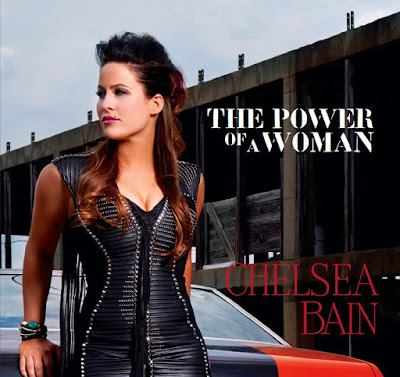 Country singer/songwriter Chelsea Bain reveals a softer, more vulnerable side in her new release "Power of a Woman," and www.Roughstock.com is set to premiere the heart-tugging music video on Tuesday morning, August 4, 2015.

"We really dialed it back from my last video," said Chelsea, referring to her "James Dean" video, where a car was flipped and caught fire. "There were so many ways we could have gone with this song, and I think we captured a storyline that will really hit home with men and women alike."

The clip was directed by Layne Pavoggi and produced by Grace Le for Mother Productions, LLC. Tim Davis served as the director of photography for the beautiful clip. The Interior narrative was shot in a home in Culver City, CA, and the stunning exterior performances were shot at the El Mirage Dry Lake in Adelanto, CA.

Chelsea has built her career on performing strong songs she has written from her own experiences and observations, but she turned to an outside source "Power of a Woman." Written by Lee Brice, John Ozier, Kyle Jacobs, the song was included on Brice's 2010 album Love Like Crazy.

"I fell in love with this song, when I first heard it on Lee's album," said Chelsea. "I always thought it would be interesting singing it from a female perspective, especially considering the strong lyrics, and I was thrilled when I found out I could record it."

Chelsea has created a legion of fans across the country through constant touring, much of it on the Bass Pro/Webasto Stage at NASCAR races. Her high-energy stage show, captivating original music, and a bigger-than-life persona have yielded over 330,000 Facebook "Likes."

"I'm really in a man's world when I perform at races, but any time I sing 'Power of a Woman' I can tell men and women are really listening to these lyrics. Sometimes I'll even see a guy's wife punch him in the arm, when the song's over," chuckled Chelsea. "

Click here to listen to "Power of a Woman."