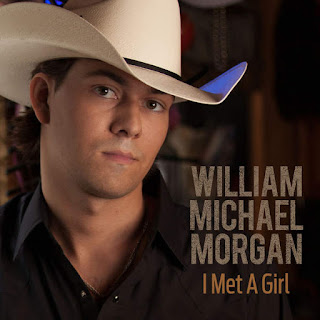 Newcomer William Michael Morgan has released his debut single “I Met A Girl”, a sweet song about a girl he’s enraptured with and has to share it with the world.  A slow-tempo serenade, very little is present aside from Morgan and a guitar. As he croons about his love and her “baby blues and crazy shoes,” he remembers when he was near speechless upon meeting her, only able to utter monosyllabic greetings. As the song plays, he declares how enthralled he is by the beginning of a relationship, wherein she let him into her world and he doesn’t know much about her yet but can’t wait to learn more. The stripped-down arrangement of the song only serves to amplify the story and Morgan’s voice.

Though the story of “I Met A Girl” has been told before, lately the slow and soft arrangement has not been favored.  In the current landscape of country music, between the tempo and Morgan’s vocals, it is sure to stand out. I almost didn’t recognize the song until I further looked into it. If anybody was wondering if there seemed to be the fingerprints of a Hunt on fire, a famed McAnally or perhaps a touch of Old Dominion a la Trevor Rosen, then you’d be right. Sam Hunt has sung this song before (though granted it sounded incredibly different, which is what Hunt strives for.) as well as co-written it with Shane McAnally and Trevor Rosen. What the stroke of luck was that William Michael Morgan, a 22 year old from Vicksburg, Mississippi connected with the song and some of Nashville's biggest and most successful songwriting powerhouses, we may never know, but we're sure glad someone saw fit to connect them through this song.

On his Facebook artist page, Morgan describes himself as a “typical 22-year-old,” which is when he first started lying to us because from the second he opened his mouth one could easily tell there is nothing typical about him.  I mean, we’ve heard the story before, kid dreams of being a country singer, turns 18 and packs his bags, heads to Music City.  From there though, the luck, talent and perseverance it took him to get here is more of a Taylor Swift fairy tale than anything else.  A tale full of talent at a young age, a voice existing outside of time and a boy ready to take the world by storm with his family behind him.  Record deal with Warner at 19, a lover of old country and new, this is surely only the tip of the iceberg with Morgan.  I can’t wait to see what stories he regales us with next.

Get social with William Michael Morgan -

Posted by LovinLyrics at 4:32 PM

I love both old and new country,& have heard both versions of this song. Yet this song totally sucks me in. I love it! The kid is great also-always interacting with those that admire him and the song.