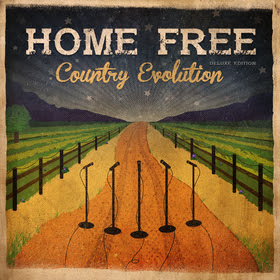 Currently in the midst of a 47-date North American tour, Columbia Records’ country sensation Home Free is partnering with top entertainment site Celebuzz.com for the official premiere of their “9 To 5” music video today (10/30). The group’s novel rendition of the Academy Award-nominated and GRAMMY Award-winning song is featured on their third studio album, COUNTRY EVOLUTION.

"We are honored to cover one of Dolly Parton's smash hits in '9 To 5,’'' said tenor soloist Rob Lundquist. "We had a great time working with some uber-talented creatives in Darren Rust, who put together this funky arrangement, and Landon Donoho and Kristin Denehy, who helped us accompany the sound with a great video. We hope everyone enjoys it."

Directed by Donoho, Home Free’s entertaining visual accompaniment to their rendition of “9 To 5” is a throwback to popular ‘90s boy band videos complete with matching attire and choreographed dance moves. The band previously released six videos from COUNTRY EVOLUTION bringing their YouTube views to over 47 million:

On December 1, Home Free is embarking on the HOME FREE FOR THE HOLIDAYS Tour bringing fan favorites and holiday jingles to 17 cities nationwide. Then in January, the band will make their European debut with an appearance at the star-studded annual LONDON A CAPPELLA FESTIVAL and just-announced dates in Birmingham, England; St. Andrews, Scotland and Dublin, Ireland. Now on sale, their European stretch launches on January 27 in Birmingham, England.

Since being crowned NBC’s “The Sing-Off” victors, Home Free has made their mark on the music scene selling more than 150,000 copies combined of their popular albums, CRAZY LIFE and FULL OF CHEER, embarking on two major national tours and amassing over 47 million YouTube views. The five-man band from Minnesota, comprised of Austin Brown (high tenor), Tim Foust (bass), Rob Lundquist (tenor), Adam Rupp (vocal percussion/beat boxer) and Chris Rupp (baritone), dropped their debut album CRAZY LIFE in 2014, which hit #1 on iTunes Country and #4 overall. Founded by brothers Chris and Adam Rupp during their college years, Home Free has been perfecting their live show for nearly a decade performing together for packed crowds at major fairs, colleges and theatres. Their experiences on the road helped carry them to the Sing-Off victory, build a loyal fan base and bring their homegrown country style into the national spotlight.