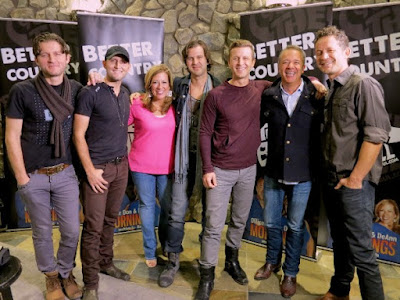 Country vocal group Spencer's Own is without doubt livin’ in the moment and taking it all in during this years CMA week in Nashville, TN. Today, the band of brothers spent time introducing their new single “Livin’ in the Moment” to radio stations and shared how super excited they are for the upcoming release of their self-titled EP set to release November 13th.

The five-member vocal band released their debut single “Livin’ in the Moment” in late October, which has already gained praise from critics for the group’s breakout vocal harmonies.

Spencer’s Own will be available November 13th where music is digitally sold including: Apple Music, iTunes, Google Play, Spotify, Amazon, Tidal and more.

For more on Spencer's Own, go to www.spencersown.com

Posted by LovinLyrics at 6:48 PM