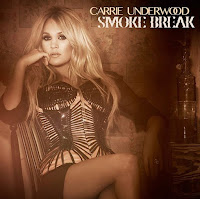 Carrie Underwood has been making all kinds of headlines since she became the fourth winner of American Idol in 2005, and for good reason. She has won numerous awards and has had many number one singles off of her four previous albums. She has now released her newest single “Smoke Break” off of her upcoming fifth studio album “Storyteller.”

Underwood sings about the everyday hard working people who bust their butts all day long who simply just need to escape their duties for a few minutes to forget the world and re-group. It revolves around two different people, one, a small-town, hard-working wife and mother of four who works three jobs just to make ends meet and the other, a big-city, hard-working man who is trying to make his family proud by becoming the first in his family to go to college.

Underwood who co-wrote “Smoke Break” with Chris DeStefano and Hillary Lindsay (both of which also helped write “Something in the Water” and “Little Toy Guns”) released the song on August 20th and it has already broken through the top 10 on the Mediabase Country Radio Charts while showing no signs of slowing down.

Posted by LovinLyrics at 9:03 PM