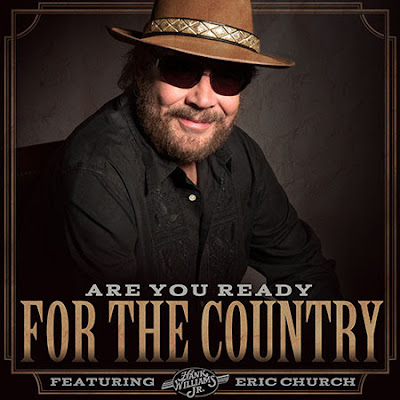 Hank Williams Jr.: Are You Ready For The Country
Cover Art Courtesy of Nash Icon Records

“It’s surreal to stand back and take in the fact that Hank Williams, Jr. is on our artist roster,” said Scott Borchetta, President/CEO Big Machine Label Group. “His music means so much to so many and he truly defined numerous moments in Country music over the last six decades. It is our true honor to be part of the next chapter as he continues to blaze his own unique musical trails. Message to ALL Hank Jr. fans - you are going to love this music - this is the good stuff.”

Marking 51 years since his first album in 1964, the Country legend is set to release IT’S ABOUT TIME (Nash Icon Records), on January 15, 2016. Hank Jr.’s 37th album is currently available for pre-order across digital retailers. In addition to the history-making “Are You Ready for the Country,” the project includes new tunes such as “Dress Like an Icon,” “Just Call Me Hank,” “It’s About Time,” and “The Party’s On” as well as re-recorded versions of classics “Mental Revenge” and “Born to Boogie” with Brantley Gilbert, Justin Moore and featuring Brad Paisley on guitar.

Earlier this month, Hank Jr. opened the 49th Annual CMA Awards with a blazing performance of “Are You Ready for the Country” featuring Eric Church. Entertainment Weekly raved of the performance, “…a burn-the-barn-down rager that left no question where we were: Country Music’s Biggest Night." Lucky fans currently have the opportunity to win the guitar Hank Jr. played during this performance – and signed by Hank Jr. and Eric - by entering at HankandEric.com through December 1.

His extremely impressive resume has spawned 70 million albums sold worldwide, six PLATINUM albums, 20 GOLD albums and 13 chart-topping albums. Hank Jr. has been named ACM Entertainer of the Year, CMA Entertainer of the Year and BMI Icon in addition to winning a GRAMMY and being inducted into the Nashville Songwriters Hall of Fame.
Posted by LovinLyrics at 4:06 PM