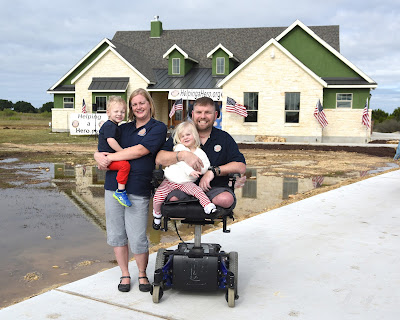 Karen and SGT (Ret) Edward Matayka pose in front of their new home from Helping a Hero on Nov. 9, 2015 in Bandera, TX with their two children, Ryan and Alana.

HOUSTON, Texas (November 17, 2015) – Helping a Hero, a Houston based 501(c)(3) non-profit, non-partisan organization providing support for military personnel severely injured in the war on terror, will host their 2015 National Gala this Sunday, November 22, 2015, at the Bayou City Events Center. This year’s gala will feature a performance by award-winning country star Mark Wills and will be hosted by “60 Minutes” correspondent Lara Logan. Former Presidential candidate Herman Cain will receive the Patriot Award while Houston’s own Joanne King Herring will receive the Defense of Freedom Award.

Helping a Hero was created to provide specially adapted homes at a deeply discounted price for qualifying service members while engaging the community to provide services and resources for the recipients and their families. Through the HelpingaHero.org Home Program, 100 severely wounded heroes from 22 states have been awarded a specially adapted home that addresses their physical adaptation needs. HelpingaHero.org is one of the three largest 501(c)(3) organizations building homes for America’s severely wounded heroes.

In addition to celebrating during the National Gala, Helping a Hero released its 2014 Financial Audit that shows that 82 cents of every dollar raised goes to Helping a Hero’s Veteran Programs.

“I am so proud of Helping a Hero for staying true to our mission and working together to insure our dollars get to the bottom line. The Helping a Hero team is committed to excellence,” said Bob Clark, Executive Director and founding Treasurer of the organization. Since its inception, Helping a Hero remains in the top tier of charities for stewardship and fiscal responsibility.

HelpingaHero.org is committed to maximizing every donor dollar to fulfill the mission. Board Secretary, Rhonda Walls Kerby, said, “The Board of Directors was very pleased that the Better Business Bureau determined that Helping a Hero met the strict standards set in the twenty charity standards of financial review. Our donors continue to invest in the lives of America’s wounded warriors by entrusting Helping a Hero with their funds.”

In continuing with the organization's charitable efforts, the evening will be a celebration of the Helping a Hero wounded warrior home recipients, including the first home awardee, PFC Kenny Adams, USA (Ret) who will complete his ten year Wounded Hero Home Contract in December 2015. PFC Adams says, “Helping a Hero is my family and I cannot thank them enough for building this home for me and supporting me for the past decade. My life is so much better because I am a part of Helping a Hero.”

SSG Shilo Harris, USA (Ret) will also share about his journey to a home. His book entitled, Steel Will, profiles his story from the battlefield to his home and beyond. “Without Helping a Hero, I would not have the opportunity to live the American dream. They have always supported me through the peaks and valleys of life. Their support is more than a home, it’s a family where you know they will always be there.”

SGT Jonathan Rivenbark, USA (Ret) grew up in foster care and received his Helping a Hero handicap accessible home in August 2015. Through his tears and with his wife standing by his side he told the crowd, “I never thought I would own a home, much less a home this beautiful, fully adapted to my needs, and one where I know my family will always be together.” Three of his foster “Moms” were there for his special day.

Most recently, on November 9, 2015, SSG Edward Matayka, USA (Ret) moved into his home in Bandera, TX. Ed and his wife Karen were both Army medics when he was struck by a roadside bomb in Afghanistan leaving him a double amputee. Karen, who was deployed, was rushed to his side within hours. As Major General Tony Cucolo presented the keys to SSG Matayka he said, “This home is more than I could ever imagine. Knowing I will be able to get around in my wheelchair and be an active dad to our [two year old] twins is such a blessing. I am so thankful to Helping a Hero for putting this team together to build this home. I am overwhelmed.”
Posted by LovinLyrics at 4:23 PM