KENNY ROGERS AND HOME FREE TEAM UP WITH BILLBOARD.COM FOR THE EXCLUSIVE WORLD PREMIERE OF “CHILDREN, GO WHERE I SEND THEE” MUSIC VIDEO 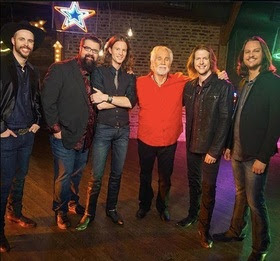 The singers met for the first time at Lehning’s recording studio The Compound in Nashville, TN to record the track this past summer. Later they reconnected to shoot the music video, directed by FifGen Films, at Music City’s historic Houston Station. The collaboration was an unexpected dream come true for Home Free.

“What an honor to share the microphone with Kenny Rogers! Apart from having one of the most iconic voices of all time, Kenny is an absolute class act,” enthused Home Free’s bass, Tim Foust. “Our producer, Darren Rust, crafted a brilliant arrangement of ‘Children, Go Where I Send Thee’ and the result is something special.”

When asked about how the collaboration came together, Kenny Rogers said, "My son’s choir director at school told me I needed to check Home Free out so I went home and Googled them and saw them sing ‘Ring Of Fire.’ They were incredible, and I thought, ‘I must do something with them,’” shared Rogers. “They were just perfect on ‘Children, Go Where I Send Thee,’ and we had a great time in the studio and filming the video together. They were so nice to work with musically and exceptionally well-driven. It really speaks volumes for their talent and professionalism. I’m so happy we were able to collaborate on this song."

This past Wednesday (11/11), Rogers launched his 34th annual Christmas & Hits Tour, ONCE AGAIN IT’S CHRISTMAS, featuring Linda Davis, in Niagara Falls, Ontario. The 32-date run supports his first Christmas album release in 17 years; the 11-track ONCE AGAIN IT'S CHRISTMAS (Warner Bros./Warner Music Nashville) is now available in stores nationwide and everywhere digital music is sold. As announced in September on NBC’S TODAY, Rogers will embark on his final world tour in 2016 prior to his retirement from touring.

Meanwhile, Home Free wrapped up their 47-date fall tour on Sunday (11/15) and is now prepping for the kickoff of the HOME FREE FOR THE HOLIDAYS Tour December 1 in Duluth, MN. The 17-city nationwide trek will feature fan favorites and holiday jingles. Celebrating the New Year, the band will make their European debut in January with an appearance at the star-studded annual LONDON A CAPPELLA FESTIVAL and just-announced dates in Birmingham, England; St. Andrews, Scotland and Dublin, Ireland.
Posted by LovinLyrics at 11:10 AM