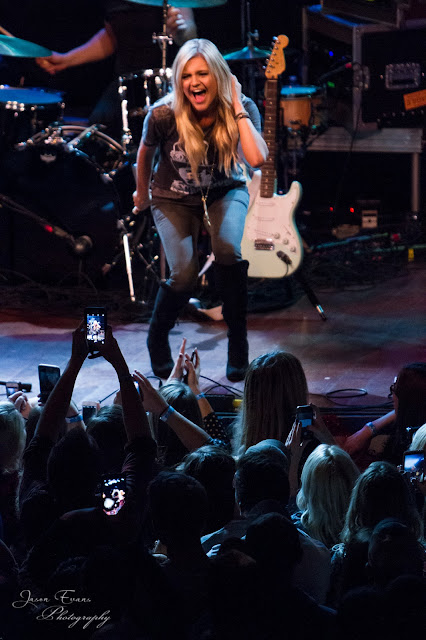 B105.1 hosted an amazing night of country music at the Madison Theatre in Covington, Kentucky. The concert was a benefit for the kids through the Toys for Tots foundation. The night kicked off with an energetic performance from Michael Ray, who scored his first #1 single in 2015 with "Kiss You in the Morning" and currently has a follow up hit out on country radio, "Real Men Love Jesus." Ray was followed by one of the hottest newcomers in country music this past year, Kelsea Ballerini, who has risen to the top of the country charts with her hits "Love Me Like You Mean It" and most recently "Dibs". The show was headlined by a group who has also made country headlines this year with their hits "Smoke" and "(This Ain't No) Drunk Dial", A Thousand Horses, whom I unfortunately had to miss as I had a 2 hour drive back home.

The Madison Theatre was packed in tight with the main floor deep from stage all the way to concessions, from one wall to the other with excited screaming fans standing shoulder to shoulder. There was no room for an additional single person on the main floor. This was no doubt a sold out show. Unfortunately, I didn't arrive in time for Michael Ray's set due to traffic. He had finished his set and the stage hands were working hard to clear the stage in preparation for Kelsea as I walked into the venue. As I walked in, a $1,000.00 check was being presented to Toys for Tots. Some fans took advantage of this short break to hit the concession stands while others decided to check out and participate in the silent auction which was being held to benefit. Once things settled down onstage, it was time for Kelsea Ballerini's performance.

Kelsea's live performance is filled with a fun, uplifting energy that will have you singing along to every line whether you know the song or not and if you don't know the words, you couldn't help but hum along. Kelsea began her set with a couple of tunes from her debut album, "The First Time", as well as a cover of Carrie Underwood's "Cowboy Cassanova". The rising star then performed her most recent radio hit as she claimed "Dibs" on the Cincinnati crowd, resulting in a very loud reception of applause and cheers. Kelsea would also perform her original songs such as "Yeah Boy", "Peter Pan" and one of my personal favorites "Square Pegs" from "The First Time" album. Kelsea is not one to avoid getting up close and personal with her fans. She sat on the edge of the stage, shaking hands, and taking selfies all throughout her performance. It's great to see an artist connect with the fans like Kelsea takes the time to do, not out of obligation but out of appreciation. You can tell she genuinely loves it.

As if the crowd wasn't already having a great time, Kelsea turned up the intensity and had the crowd dancing to a medley of dance covers featuring many popular hits from artists such as The Backstreet Boys, N*SYNC, Beyonce, and Christina Aguilera. With the night nearing an end, Kelsea had yet to perform her biggest and first #1  hit. She spoke to the crowd about songwriting and mentioned that she and her friends were listening to "this song" and began to play and sing Rihanna's "Take A Bow". She would mention that after listening to that song, she and her friends got to work at writing "Love Me Like You Mean It" and as she began to play, the crowd exploded with screams. Kelsea performed a 45 minute set that left the crowd begging for more!

The Toys for Tots foundation is a charitable organization run by directors who have all served in the United States Marine Corps. Per the official website of the Toys for Tots, "The primary goal of Toys for Tots is to deliver, through a new toy at Christmas, a message of hope to less fortunate youngsters that will assist them in becoming responsible, productive, patriotic citizens.". For more information on the organization, go to www.toysfortots.org.