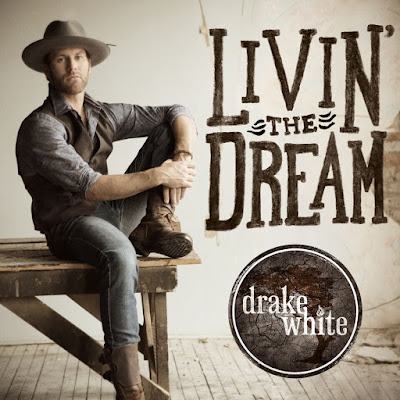 Born and raised at the foothills of the Appalachian Mountains in Hokes Bluff, Alabama, Drake White grew up scanning his radio dial for anything he could relate to from country to blues to rock 'n roll. In the rural south, White's musical tastes knew no boundaries, labels or discriminations, a trait that has taken root in his performance style with Rolling Stone Country observing, "He doesn't play music so much as become possessed by it, shaking, clomping and hopping up on his toes like a cowboy Michael Jackson. It's a celebration of his country roots and, really, of being back in control." That verve is encapsulated in White's new single "Livin' The Dream," and it's a message he knows audiences worldwide need to hear.

Written by Tom Douglas, Jaren Johnston and Luke Laird, the lyrics for "Livin' The Dream" celebrate life, and even though there are struggles -- "Lots of reasons just to give it on up/Leave your soul on the shelf collecting dust/Live in a world with broken promises/And empty tanks..." -- White reminds us to denounce the negative and celebrate the little things.

"'Livin' The Dream' is a reminder of how blessed we all are even though, especially times like now, it may feel like our world is falling apart, and so, if we can help remind folks to celebrate the little moments, celebrate life, love and music, then it really does feel like we're at least attempting to live up to our objectives musically," shares White. "In the past, music has not only been my vehicle for escape but also for unification, and with this subtle reminder, we're hoping to give audiences reprieve if even for three minutes and 11 seconds."

Produced by Ross Copperman and Jeremy Stover, "Livin' The Dream" brilliantly showcases White's bluesy twang, a voice the Milwaukee Journal Sentinel dubbed as "...one of the most boisterous and soulful male voices in country music."

Having performed over 100 shows in 2015 inclusive of tour stops with Little Big Town and Zac Brown Band, when not on the road White has been diligently working on his forthcoming album for Dot Records Nashville, expected for release in 2016.