Troy, Ohio ran out of moonlight with Randy Houser on Saturday night! 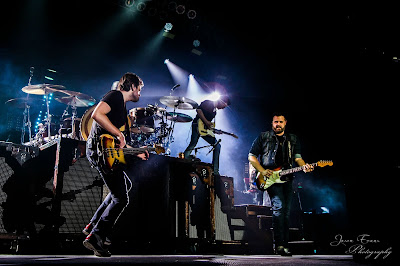 
Country music superstar Randy Houser debuted his first album "Anything Goes" in 2008 with Universal South Records and now, seven years later, he visits Troy, OH on his very first tour as a headliner. The "We Went" Tour began this month and will run throughout Mid-December finishing up on December 18th in Akron, OH . This tour also features special guests Craig Campbell and Frankie Ballard. As showtime approached, there were many empty seats in the back and across the top rows of the arena as people packed the floor, ready for a party.

The night kicked off as radio personalities Nancy Wilson and Frye Guy from Dayton's K99.1 FM introduced, Craig Campbell, the first act of the night. Craig took to the stage with his band, kickstarting the party with a cover of the Brooks and Dunn favorite, "Play Something Country" which would set the pace for the rest of his show since Craig is the definition of country. The crowd on the floor was standing from the start and remained standing throughout the set. Craig performed his more popular hits including "Keep Them Kisses Comin'", "Fish", and "Family Man". In addition to these, Craig also performed a couple of new songs including "Winnebago" and the crowd enjoyed audience participation on this one. The second new song Craig performed was "Outskirts of Heaven" which was an immediate favorite of mine since debuting the song on Facebook a while back in a New Music Monday post. I was a little surprised that Craig's latest single "Tomorrow Tonight" didn't make the setlist, but there is only so much you can fit into a 35 minute set.

Up next for the night was rising star, Frankie Ballard. Frankie is an amazing guitar player with great vocals and exhibits a ton of energy onstage. Frankie was sporting a rhinestone blazer as he performed "Young and Crazy" followed by a party song called "Drinky Drink". Frankie has a uniqueness to his voice that brings a different sound to country music that is displayed in his latest hit song "Sunshine and Whiskey" which also got the crowd singing along. Ballard introduced his latest single, "It All Started With A Beer", which was well received by the audience. Frankie would showcase his mad guitar skills with every song that he performed. This was definitely the case during a snippit of Keith Urban's "Somebody Like You" and a cover of ZZ Top's "La Grange" which finished a set of captivating guitar and organ solos.

It All Started With A Beer


As the crowd took a 20-25 minute break to head to the restrooms, merchandise tables and refill their beers, the stage hands were working quickly to clean up the stage and transition it into an elaborate scene including a large backdrop screen, multi level platforms, deer antlers and even a taxidermied alligator head.. As the clock hit 9:35pm, the radio personalities were back onstage to introduce the headliner that this crowd was here for. The house lights dimmed as stage lighting appeared and Johnny Cash began playing throughout the arena. The band took the stage and kicked it into high gear with Houser's latest single "We Went". Randy followed that up with a song from the "How Country Feels" album called "Growin' Younger". Houser and the crowd fed off each other's energy the whole night as the crowd danced, waved their arms and clapped their hands. The crowd didnt waste any time getting into Houser's performance. He thanked the crowd for coming out to his first ever headlining tour and that gratitude also came with a warning as Randy had to kick out a rowdy fan the night before in Corbin, KY after performing a new song called "Fired Up". Upon finishing that song here in Troy, Randy cautioned the crowd with a "Y'all calm down now, I had to throw a son of a bitch out of here last night". Go Randy! A fun concert atmosphere has no room for that kind of nonsense.

Although this tour has a big stage production with an amazing light and smoke show, Randy was able to slow things down and create an intimate setting a couple of times during the show in which the band sat back and take a break, letting Randy captivate the crowd while standing under a spotlight with nothing but his acoustic guitar and the soulfulness and power of his voice during "Like A Cowboy", which was nominated as the CMA Song of the Year, as well as during the beginning of "Goodnight Kiss". Patriotism was also a big part of Randy's show as the stage displayed an American flag with red, white and blue lighting throughout the set. Randy acknowledged our service men and women in the crowd and even bought one of those heroes in attendance a beer as the crowd filled Hobart Arena with chants of "USA, USA". With all of the recent tragedies in the world and the struggles that our police officers, firefighters, service men and women and first responders encounter everyday, it was a great thing to see them recognized for their efforts during moments like this that cause the hair to stand up on your arms and turn your skin into a Butterball turkey.

Throughout Houser's approximately 80 minute set, I was waiting for the moment where boredom sets in and I'd begin to lose interest ... well, that didn't happen. Randy put on an entertaining show with moments of laughter but most of all the energy that is packed into a Randy Houser show is amazing. Randy's voice showed no signs of struggling as he belted out the lyrics one moment and could turn it way down the next. Houser showcased the expertise and skill in his vocal range by covering a recent popular hit with Sam Smith's "Stay With Me". Randy showed off his soulful bluesy side with a song off his "They Call Me Cadillac" album called "Somewhere South Of Memphis". The attitude that Randy can put into a song is overwhelming and almost unbelievable when you hear him perform live. The first time I noticed the "Houser 'tude" was in the video for "Boots On" and it was just something about the kid in the back seat of the car just jamming it out on air guitar while Randy is singing along, pumping gas and getting locked out of the car. Needless to say I was stoked to see that same attitude in his live performance.

If you get a chance to catch one of the upcoming "We Went" TOUR DATES , do yourself a favor and check it out! Tickets are reasonable, ranging between $29.50-$49.50 on average and you will see close to 3 hours total of great live music and an amazing stage show during Houser's set. Take time to check out our Photo gallery from the show!

Stay With Me (Sam Smith cover)

Connect online with all of these artists:

Posted by LovinLyrics at 4:17 PM