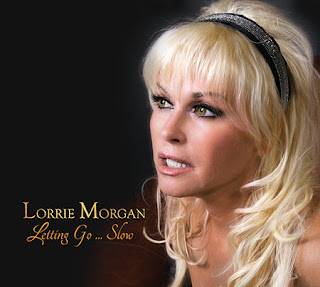 “I have been a daughter, a bride, a mother, a divorcee, a widow, a single mother, a grandmother, a breadwinner, and, ultimately a survivor. It seems, in many ways, I am a living, breathing country song, and I know what I sing.” – Lorrie Morgan

NASHVILLE, Tenn. (December 21, 2015) – Lorrie Morgan dominated the 90s with top-charting hits like "What Part Of No," "Except For Monday," "Five Minutes," and "Watch Me," and celebrates a career spanning four decades with over 8 million albums sold. A multiple Female Vocalist Of The Year Award-Winner, she is the first female country star in history to have ever garnered three consecutive albums certified Platinum. In 2016, the country music songstress is back with her first solo album in five years. Morgan will release Letting Go… Slow on February 12, 2016 on Shanachie Entertainment. The album follows her collaboration album, Dos Divas, released with Pam Tillis in 2013.

Letting Go… Slow features 12 tracks, some upbeat and sassy like her top hits “What Part Of No,” and “Five Minutes,” others pensive and heart-rending. Produced by Richard Landis, (whose credits include some of Morgan’s top hits, Vince Gill, The Nitty Gritty Dirt Band), the album seemingly takes on some of Morgan’s most challenging life experiences through song in soulful ballads like “What I’d Say,” “Slow,” and a powerful cover of Larry Gatlin and The Gatlin Brothers’ “I’ve Done Enough Dying Today.” She’s witty and radiant on “Jesus and Hairspray,” embraces the classic country sound on “Strange,” and expands her musical depth on a cover of Bob Dylan’s classic, “Lay Lady Lay.”

The keen production on each track highlights her signature vocals, which have long been praised by critics. “There’s a dark grain to her voice, a fine, sandpaper edge that imbues her strong, clear pipes with subtle grit. She’s one of the most distinctive singers of contemporary country, a subtle interpreter who is at her best when explicating sorrows large and small,” wrote CMT. American Music Channel added, “Veterans of the singing business shouldn’t look nor sound as good as Lorrie Morgan, but then again, she was never exactly your typical Nashville singer.”

The daughter of late country star George Morgan, Morgan made her Opry debut at the age of 13 and was one of the youngest to ever be inducted as a lifetime member, at age 24. She celebrated multiple top-charting hits including “I Didn’t Know My Own Strength,” “I Guess You Had To Be There,” “Something In Red,” among many others. She is a four-time Female Vocalist Of The Year Award-Winner, and in 1994, she garnered CMA’s Album Of The Year Award for Common Thread. In 1990, Morgan and her late husband, Keith Whitley, took home the CMA Award for Vocal Event Of The Year for “Til A Tear Becomes A Rose.” She’s celebrated multiple RIAA-Certified Gold and Platinum records throughout her storied career.

For a full list of tour dates and to stay informed about the latest on-the-road happenings with Lorrie Morgan, please visit www.lorrie.com.