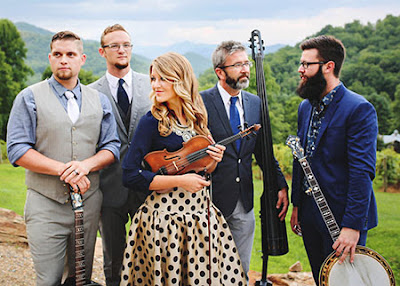 APA is excited to announce the signing of family Bluegrass act Mountain Faith for booking representation. “Over the past fifteen years, Mountain Faith has become one of the most respected acts in the Bluegrass genre,” said APA’s Cass Scripps. “We are anxiously looking forward to sharing their unique story and talents with fans across the country, and putting them in front of as many people as possible.”

The band, who has just returned from a successful series of stops performing for U.S. troops in the Persian Gulf, is wrapping up the year with several performances, including one at the Atlanta Falcons vs Carolina Panthers game on December 27. They will ring in the new year at the Berry Freewill Baptist Church in Berry, AL. Details concerning their 2016 tour dates will be forthcoming.

Mountain Faith, who still practice in their family tire shop in rustic Sylva, North Carolina, has become a road circuit favorite, playing everywhere from arenas and auditoriums to churches. When they are not on the road, they can be found delivering their music to the crowds at Dollywood in Pigeon Forge, TN.

They've also become well known through their television appearances on the Daystar Television Network, as well as their recent stint on season ten of America’s Got Talent. Their performance of OneRepublic’s “Counting Stars” earned them four “Yes” votes from the celebrity judging panel, which led to performances with some of the major stars in the format, including Alison Krauss & Union Station. They also have been featured in the pages of many of the top magazines, newspapers, and websites in music – including Bluegrass Today and HNGN.com. The exposure on the show also helped to send their social numbers into the stratosphere.

2015 marks a watershed year for the group, who earned a staggering fifteen nominations from the SPBGMA (Society for the Preservation of Bluegrass Music of America) Bluegrass Music Awards – including nods for each member in their respective categories, as well as Entertaining Group of the Year and Album of the Year for their Feelin’ Blue album, released on Mountain Fever Records. Their most recent project is entitled That Which Matters, which includes their most recent single, “Emily (It’s Love),” which was released in October 2015.

For more information, go to www.MountainFaithBand.com
Posted by LovinLyrics at 8:03 PM