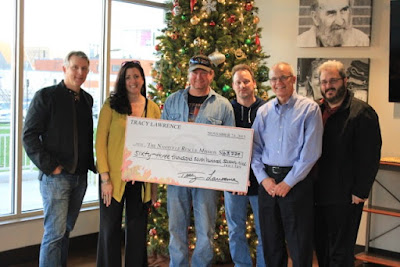 Tracy Lawrence and a group of celebrity friends raised more than $63,000 for the Nashville Rescue Mission at the 10th Annual Mission: Possible Turkey Fry in November, continuing the country music star’s personal mission to help those in need.

“Growing up for me, having a good meal commemorating the Thanksgiving holiday meant more than just satisfying your appetite,” Lawrence said. “It signified a time to reflect, count our blessings and share what we're thankful for, so to have an opportunity to feed those in our area while helping them feel that sense of pride for feeding their families, well there's no better feeling. Over the years this event has grown, and every year I am even more thankful to those who come together to make this such a success.”

The “Honky Tonkin’ with Tracy Lawrence” national syndicated radio host’s yearly event has provided more than 75,000 meals to those in need in its decade-long history. The event has grown over the years and the 2015 installment, held Nov. 24 at the Nashville Rescue Mission, included Lawrence’s first concert at City Winery with performances by Charlie Daniels, Halfway to Hazard, Lorrie Morgan, Darryl Worley and Brad Arnold of 3 Doors Down.

Lawrence returned to the Mission last week to present Martin Ollenberger with a left-handed guitar from Taylor Guitars. Ollenberger, who lost his job and fell into homelessness because of health difficulties, is the face of the NRM this holiday season, starring in a commercial for the mission. Learn more about his story and the mission here.

Lawrence, the Country Music Association and Academy of Country Music award-winning artist, is best known as a hitmaker with nearly two dozen hits, 13 million albums sold and many memorable shows, a legacy he shares through dozens of live appearances every year. Now Lawrence also brings a lifetime of stories and experiences to radio listeners on “Honky Tonkin’ with Tracy Lawrence,” picked up by dozens of stations across the nation this year, including Nashville’s WSM. The show focuses on hits of the 1980s, ‘90s and early 2000s with special guests and interviews every week.

To learn more about Lawrence, his radio show or to purchase tickets, visit www.TracyLawrence.com and follow @tracy_lawrence on Twitter.
Posted by LovinLyrics at 8:16 PM