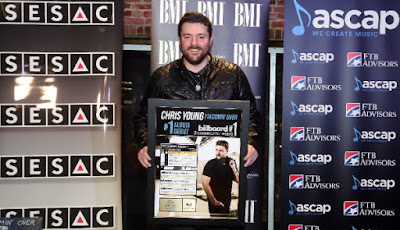 Chris Young and hundreds of his music industry friends came together yesterday evening for a special celebration from Nashville’s One at the Cannery, honoring the “outstanding balladeer’s” (Associated Press) No. 1 album, I’m Comin’ Over, and the title-track’s three-week run atop the Billboard Top Country Airplay chart. As one of only two country artists to achieve a three-week chart-topper in 2015, Young (BMI) and his “I’m Comin’ Over” co-writers Corey Crowder (ASCAP) and Josh Hoge (SESAC) were surprised with the news of RIAA Platinum certification for the lead single, in addition to being presented with plaques recognizing the album and song’s many achievements.

“I’m very proud to have made this song with Corey and Josh,” said Young. “This is my seventh No. 1, and seven is my lucky number ever since I was a little kid. I truly am lucky and very blessed.”

Hailed by the New York Times as “excellent” and “one more…strong chapter in a steady career full of them,” the praise for Young’s I’m Comin’ Over is especially notable as the ACM nominated vocalist took his first turn as co-producer on this fifth album, alongside Corey Crowder.

In addition to the accolades, Young is starting the year on a high-note, enlisting powerhouse vocalist Cassadee Pope for his follow-up single, “Think Of You.” His duet partner will also join as special guest on Young’s 2016 tour, starting January 21 in Lowell, MA. Fans can purchase tickets for the 2016 “I’m Comin’ Over” Tour, presented by AEG Live, at ChrisYoungCountry.com and aeglive.com. A limited number of exclusive VIP Packages are available, which can include premium tickets, access to a Chris Young preshow acoustic event, limited-edition merchandise and much more.
Posted by LovinLyrics at 12:01 PM