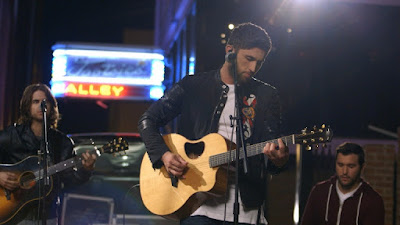 Tune in to "AT&T AUDIENCE Network presents: Michael Ray" airing as part of AUDIENCE Network's new, artist-driven music series this Friday, February 12 at 9:30pm ET/PT (DIRECTV Ch 239/AT&T U-verse Ch 1114). The intimate performance and interview were filmed live in Nashville, TN, where the acclaimed singer-songwriter performs songs from his self-titled debut album out now on Atlantic Records/Warner Music Nashville. Watch as the rising country singer delivers a heart-stopping version of his No. 1 single "Kiss You In The Morning" among other fan favorites while he reveals what inspires him as a songwriter.

For a preview of the show, watch Michael Ray perform "Kiss You In The Morning" on PEOPLE COUNTRY today (here).

.
"I am so excited to be able to share this project we shot with the world," explains Michael Ray. "It a powerful experience to be able to revisit so many memories and places that have had a profound impact on my journey so far, especially while standing on the sacred ground that many of my heroes have stood before me."

AT&T AUDIENCE Network's new music series slate features groundbreaking concerts, in-depth artist interviews, unique stories and exclusive performances all shot in ultra high definition 4K. AUDIENCE Network is available to DIRECTV and AT&T U-verse customers via broadcast and live stream on directv.com and uverse.com and on smartphones and tablets, via the DIRECTV and U-verse apps.
Posted by LovinLyrics at 5:40 PM