BIG & RICH BRING THEIR SOUTHERN STYLE TO "THE BIG INTERVIEW" ON AXS IN AN ALL-NEW EPISODE FEB. 16 AT 8PM ET 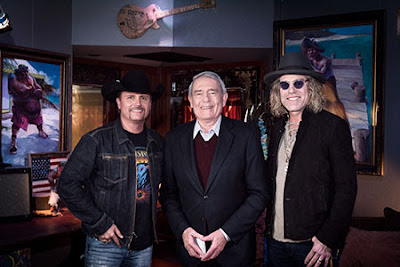 Beloved country stars John Rich and Big Kenny—better known as the smash hit duo Big & Rich—rock THE BIG INTERVIEW, in an all-new episode premiering Tuesday, February 16, at 8pm ET. During the candid hour-long sit-down, the award-winning twosome opens up about the trials and tribulations of creating their own label, their musical influences, the creation of the MuzikMafia and how to determine what qualifies as real country music. For the first time ever, the show is giving fans a sneak peek of the episode HERE before it airs in full.

Outlining how the production of their fifth album, 2014’s Gravity, led to the duo creating their own record label, John Rich says, “We recorded this record, Gravity, we were on Warner Brothers Records at the time… The label has no idea we’re even doing it, and we finish the thing and turn it in at Warner Brothers, and go, ‘Surprise! New Big & Rich record!’ And Warner Brothers goes, ‘That’s great! It’s gonna be at least a year before we can put something out, ‘cause we’ve already got our entire year planned out.’… I think Kenny put it best, he said, ‘Well, sometimes, creativity and commerce have to part ways’, and that’s exactly what happened.”

The duo were able get out of their contract and establish their own label, which has some benefits, says John. “The pros are we get to call all the shots, we get to determine what songs come out, when and how they come out. And we own the content,'cause that’s the big one. You own the masters, you own those recordings. But, what are you giving up? Well, you’re giving up the political muscle that the record label has.”

Kenny expounds on this, saying, “And you’re taking on the risk. Everything, you know, if you don’t perform it, you don’t make it happen, then it’s gonna come out of your own pocket. You’re completely at risk, but you also know that your own decisions are what’s gonna get you there.”

On the music that has influenced and inspired their own trademark brand of country, Rich says, “Kenny and I draw from all the way back to Johnny Horton, and Roger Miller, and Hank Sr., and Johnny Cash, and all those kinda guys, all the way up to modern acts like AC/DC.”

On the creation of their famed collective of artists, known as the MuzikMafia, Rich reveals, “There was a real segregation of genre at that point, here in Nashville. The big phrase was, ‘That ain’t country.’ If you’re an urban artist, you can’t write a country song. If you’re a country artist, you can’t write a rock n’ roll song… What they were forgetting is, if you go back to guys like Johnny Cash, he was a rock n’ roll act coming out of Memphis, singing about the most outrageous subjects… That was the beginning, the MuzikMafia disproving the myth that you had to segregate the creative sides.”

With the genre’s sound constantly evolving, many traditional fans and artists have begun questioning what can and cannot be called ‘country.’ Rich effectively puts an end to the debate, stating, “Some of the new country music out now is pushing it even further than we pushed it, and you’ll hear that come up again, ‘Well, that ain’t country.’ Well, you know who decides what’s country or not? The fans. And if the fans buy that record, and they heard it on the country station, and they go to that guy or girl’s show, guess what! That’s country. That’s where country music is right now.”

To see more of this entertaining episode, be sure to tune in to THE BIG INTERVIEW on Tuesday, February 16 at 8pm ET, only on AXS TV.