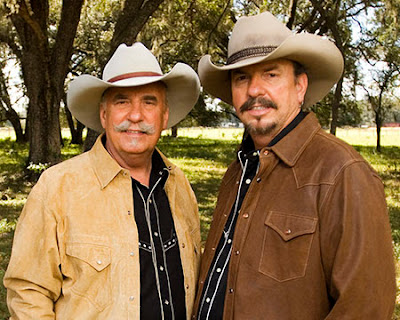 2016 marks the 40th anniversary of the release of “Let Your Love Flow,” the 1976 classic that launched the recording career of The Bellamy Brothers. Since that iconic song was first issued, Howard and David Bellamy have created one of the most successful careers in the history of Country Music. With 27 Top 10 and 14 No. 1 singles among a catalog that includes “Redneck Girl,” “Old Hippie,” and “Kids Of The Baby Boom,” the duo have consistently released hit after hit over the past four decades in the United States.

But, that only tells a mere fraction of the story of The Bellamy Brothers. A close look at their concert schedules over the past two decades reveals one of the most global careers in the history of country music. The duo has taken their music to a wide variety of countries across the world over the years – including stops in Germany, Norway, and Sweden. The Bellamy Brothers performed a sold-out string of shows with Swiss superstar Gola – adding his name to a list of collaborators over the years that has included Neil Diamond, Dolly Parton, George Jones and Blake Shelton. In Switzerland, their crowds numbered into the 35,000 range, as well – demonstrating their international appeal.

In addition, the Bellamy Brothers have taken their music to places where no other country act has ever performed, such as Qatar, Sri Lanka, New Caledonia and even India. In fact, one of their classic hits there made an impact on the audience unlike any the duo has ever seen in the states.

In a 2014 interview with Billboard, David recalled that on one of their India visits that “People came up to us and asked 'Are you going to do the 'first dance' song? We weren't sure what they were talking about, but it was 'Beautiful Body' because they use it as the first dance song at weddings. You never know how someone will interpret a song, I guess," he said. Of course, the song that he is referring to is their first number one Country hit, 1979’s “If I Said You Had A Beautiful Body (Would You Hold It Against Me).”

And, as The Bellamy Brothers gear up for their next forty years, they are keeping their close ties with their fans abroad. In 2016, the duo will be returning to Switzerland, as well as making stops in Denmark, Germany, Sweden, and Norway. Howard and David take a lot of pride in pleasing the audience – regardless of which continent their feet are planted on.”

“We have been very blessed to have taken our music to a lot of venues and destinations that have always surprised us,” said Howard Bellamy. “Regardless of where we might be, what makes each night special is that relationship with the fans, and getting to hear them sing along. After all,” he reasons, ‘Redneck Girls’ are everywhere.