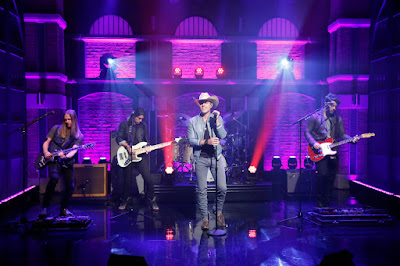 Dustin Lynch made his debut on NBC’s Late Night with Seth Meyers yesterday (2/17) with a “sultry” (Rolling Stone Country) performance of Top 20-and-climbing hit “Mind Reader.” The R&B influenced single, written by Rhett Akins and Ben Hayslip, is the third released from his latest album WHERE IT’S AT and follows two consecutive #1 smashes (“Hell Of A Night” and “Where It’s At”).

Fresh off a 4-night run across the East Coast on his heavily pre-sold out HELL OF A NIGHT Tour, Lynch kicked off Luke Bryan’s 2016 KILL THE LIGHTS Tour last night (2/18) in Evansville, IN, for his second run as the superstar’s opener.
Posted by LovinLyrics at 9:46 AM