Information and Tickets ONLY Available at www.JohnnyCashBirthday.com 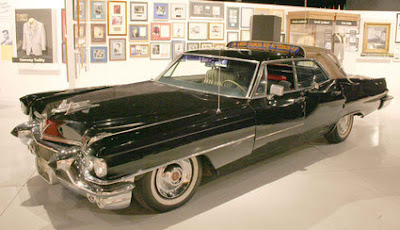 Pictured above: The legendary "One Piece at a Time" car, made famous by Cash's song of the same name that peaked at #1 on the Billboard Top 100 Country Singles chart in 1976.

The new space will showcase many unique interactive features, memorabilia, costumes and more. Throughout the new wing, fans have the opportunity to interact with the man in black through his music. One of the many highlights of the exhibit is a technology-driven area that provides attendees the opportunity to mix their own versions of Cash’s songs. Additionally, costumes, props and other artifacts from the Golden Globe and Academy award-winning movie, Walk The Line, will also be on display.

Scheduled highlights of the Birthday Bash are meet n’ greets, q&a’s with special guests, intimate guest performances, trivia contests, and more. A fan favorite of the annual event is the Fan Jam, which puts the spotlight on attendees. Fans can bring their own instruments and have the once-in-a-lifetime opportunity to perform some of Cash’s greatest hits with Cash’s one and only drummer, W.S. Holland.

On Saturday, Feb. 27 only, the legendary "One Piece at a Time" car, made famous by Cash's song of the same name that peaked at #1 on the Billboard Top 100 Country Singles chart in 1976, will be on display in Nashville for the first time in decades. Fans can photograph and be photographed in the car. The Cadillac was built using parts manufactured from 1949 to 1973.

Johnny Cash Museum Founder, Bill Miller states, “The Birthday Bash Fan Jam has become a perennial favorite for our attendees. It’s a chance for the fans to experience the spotlight and pay tribute to Johnny through song.”

Only a limited number of tickets to the Johnny Cash Birthday Bash are available. Tickets start at $55 per person and are only available for purchase at www.johnnycashbirthday.com. Tickets must be purchased in advance and will NOT be available on-site. The event has consecutively sold out since its inception in 2014. Host hotel, Fairfield Inn & Suites (901 Division Street), is offering special rates through Feb. 16 to Birthday Bash attendees. Rooms can be reserved by calling 1-800-331-3131.

Located in the heart of downtown Nashville (119 Third Ave.), the museum displays possessions spanning Cash’s 48-year music career and personal items, comprised of family photos, home furnishings, handwritten letters, as well as belongings from his early life as the son of a cotton farmer in Arkansas and his time in the U.S. Air Force.

Since opening on April 26, 2013, the museum has received widespread national attention, including a AAA Gem rating as well as being named the #1 Must Visit Museum for Music Lovers by Conde Nast Traveler [Worldwide], the #1 Pitch Perfect Museum by National Geographic [Worldwide], and one of five Nashville Must-Sees by Forbes Magazine. Additionally, the museum has been featured by numerous other national and regional outlets, including CNN, USA Today, NY Times, Time Magazine, Southern Living, Huffington Post, Rolling Stone, Money Magazine, and many others.