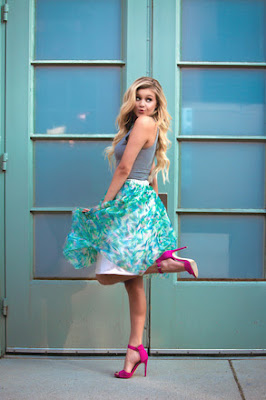 What a way to start a Monday for rising New Artist Kelsea Ballerini whose record-breaking debut single “Love Me Like You Mean It” was just released to radio a little over a year ago. Today (2/1), the Black River Entertainment recording artist sparkles with her first-ever ACM Award Nominations in two categories – Female Vocalist of the Year and New Female Vocalist of the Year.

Ballerini took to Twitter immediately upon hearing the news and tweeted, “OH MY GOD. this is unreal. I don't even know what to say. thank you.”

Yesterday (1/31) Ballerini performed at the NHL All-Star Weekend in Nashville, TN after just returning from taping the special “The Wonderful World of Disney: Disneyland 60” in LA with artists such as Elton John, Jessie J, Tori Kelly and Ne-Yo, airing February 21 at 8:00p.m. ET on ABC. Gearing up for her first international trek to Australia this March to perform at the Country CMC Rocks Festival, she has previously shared the stage with Alan Jackson, Lady Antebellum, Tim McGraw, Carrie Underwood and Keith Urban and will join Rascal Flatts for previously announced dates this summer.
Posted by LovinLyrics at 6:53 PM