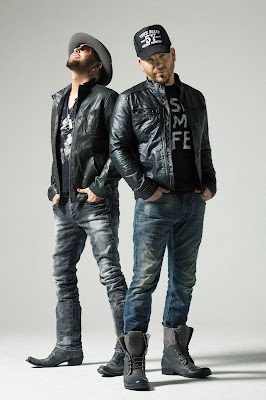 One of the feel good stories in country music during the past year is the success story of Reviver Records recording duo LOCASH. Consisting of Preston Brust and Chris Lucas, they've watched as “I Love This Life,” has climbed all the way to No. 2 on the Billboard airplay chart.

Watching the rise of the song, which was co-written by veteran songwriter Danny Myrick and Academy of Country Music Awards nominee Chris Janson, has been a moment that the duo will never forget.

“Hard work is really starting to pay off for us,” says Chris Lucas. “We have been seeing the response live. People are singing it back to us. It’s an amazing feeling, for sure.” Brust agrees, adding, “Every day is so exciting. I know this sounds like a cliché, but dreams do come true. We have worked so hard to get to this point. It’s so surreal.”

And, with 2016 in gear, the good times are only going to get better. On February 24, LOCASH will make their network morning show debut on NBC’s The Today Show from New York City, and will guest on ABC’s Jimmy Kimmel Live just a few weeks later, on March 16.

The Today Show is one of the most iconic network shows of all time,” says Brust. “When you think about all of the artists that have gotten a chance to showcase their talents on that platform, you realize just how lucky you are.” As far as the Kimmel appearance, Lucas says it’s just more of their goals being realized. "Come on, late-night network television, man! Who doesn’t dream of that? We’re just so blessed and grateful for everything that is going on right now with our careers, and our team that has gotten us where we are. I think if you talked to Preston or me, either one of us would definitely say… 'I Love This Life.'"

LOCASH has also just released their follow-up to their smash hit, with “I Know Somebody” beginning to make an impact at radio.

LOCASH “I LOVE THIS LIFE” TOUR:

Posted by LovinLyrics at 8:10 PM