'IT'S ABOUT TIME' HANK WILLIAMS JR. PERFORMS AT NISSAN STADIUM DURING #CMAFEST2016 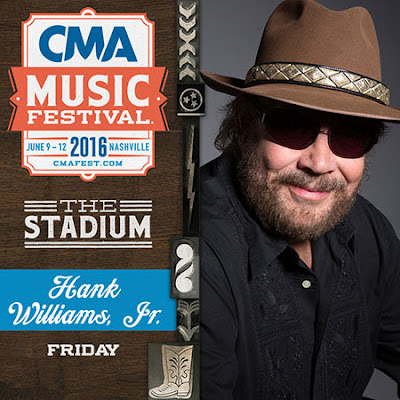 Personal note:
Sure hope "It's About Time" for Hank, Jr to be inducted into the Country Music Hall of Fame.
-  Jenn

Hank Williams Jr. will entertain all of his rowdy friends during CMA Music Festival when he plays The Stadium Friday, June 10. The dynamic entertainer will join Carrie Underwood, Chris Stapleton, Eric Church and Sam Hunt as part of the Friday night lineup. He’ll also jam with an all-star lineup for the Life & Songs of Kris Kristofferson tribute show at Nashville's Bridgestone Arena March 16.

Hank Jr. is on a hot streak of success with his 37th studio album It’s About Time (Nash Icon Records), which remains in the Top 20 after achieving the highest peak position of his career with a No. 2 position on Billboard’s Top Country Albums chart when it was released Jan. 15.

The country icon’s 2016 shows have all been SOLD OUT and continues to add additional dates (see tour schedule below). Hank Jr. will also co-headline a special limited run tour with Chris Stapleton this summer when the two music renegades visit 8 cities with dates lined up in Houston, Austin, West Palm Beach, Detroit (Clarkston), Cleveland, Indianapolis and Cincinnati.

After six decades of top charting singles, Hank Jr. remains in-demand on the road and on air after recently appearing on “Audience All Access” on AT&T's Audience Network, “The Tonight Show Starring Jimmy Fallon,” “CBS This Morning” and an inspiring performance with Whoopi Goldberg on “The View.” Hank Jr. was also NRA Country’s featured artist for January.

Fans can keep up with Hank Jr. by visiting hankjr.com.
HANK WILLIAMS JR. ON TOUR: