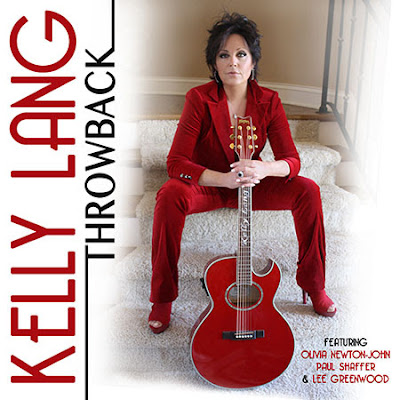 Recording artist and acclaimed songwriter, Kelly Lang, will take the stage at Nashville’s 3rd and Lindsley on Tuesday, March 29, 2016 at 7PM to perform songs from her brand new album Throwback. The show will spotlight songs from the star-studded project, which includes guest appearances by entertainment icon Olivia Newton-John, “God Bless the U.S.A.” singer Lee Greenwood and former band leader on “Late Show with David Letterman,” Paul Shaffer. Tickets for the show are just $15 and are available in advance at www.3rdandlindsley.com and at the door. The Springer Mountain Farms Chicken sponsored show will take fans on a roller coaster ride with a very special surprise.

“In recording these, it was strictly out of honor for the artists who recorded it before. I’m trying to pass along my appreciation for these artists to future generations,” says Lang. “I heard a very interesting quote, which pretty much sums it up: ‘singing an old song is like visiting an old friend.’”

The latest album, which hits the highest and lowest of emotions, is available now on iTunes, Amazon and kellylang.net. The inspiration behind the project comes from a series of “Throwback Thursday” videos on Lang’s Facebook page, where she sings some of her favorite ‘throwback’ tunes. Listen in close, as the talented singer pours her heart out on standout tracks like “How Can You Mend a Broken Heart” featuring Olivia Newton John, who adds, “My dear friend Kelly Lang has sung some of my favorite songs on this CD and I loved singing our hero Barry Gibb's song with her!” Fans can step inside the studio with Olivia and Kelly in a behind-the-scenes video HERE. Also featured on the album is the breathtaking “Last Date,” which features “Late Night With David Letterman” band leader Paul Shaffer playing keyboard (check out behind-the-scenes footage HERE). Grammy award winning singer Lee Greenwood teams with Lang on the ballad, “It Turns Me Inside Out,” which fans can preview HERE.

The project, which was recently spotlighted on Billboard, sees Lang tackling songs originally made famous by top artists like Kenny Rogers on the track “Morning Desire.” Lang had the honor of performing at the iconic singer’s Country Music Hall of Fame induction alongside Barry Gibb of the Bee Gees. The CD also features the cut “I Can’t Help Falling In Love With You,” which was made famous by the late Elvis Presley, who was a close friend to Lang’s husband, 21-time country chart-topper T.G. Sheppard. The project was released via Leopard Entertainment and produced by Kelly Lang.

Lang is no stranger to success, getting her start in the business as the winner of the hit television show “Ed McMahon’s Star Search.” Over the years, she has also excelled as a talented songwriter, penning multiple songs for Lorrie Morgan, including tracks on upcoming albums Letting Go Slow and A Picture of Me – Greatest Hits & More. The talented singer/songwriter also wrote eight songs on T.G. Sheppard’s latest critically acclaimed album, Legendary Friends & Country Duets.

1. By The Time I Get To Phoenix
2. It Turns Me Inside Out (duet with Lee Greenwood)
3. Baby Don’t Get Hooked On Me
4. Till I Can make It On My Own
5. Crying
6. How Can You Mend a Broken Heart (duet with Olivia Newton-John)
7. Neither One of Us Wants To Be The First To Say Goodbye
8. Morning Desire
9. Something
10. Last Date (featuring Paul Shaffer on piano)
11. I Can’t Help Falling In Love With You
12. Kiss You All Over

Posted by LovinLyrics at 9:24 AM