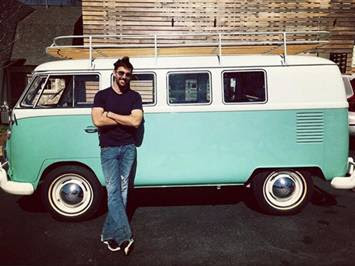 Country music superstar Jake Owen released his highly anticipated new single, “American Country Love Song,” exclusively to iHeart Radio yesterday. Today, the song is available at digital retail partners and fans can listen to the track here. The song, written by Ross Copperman, Ashley Gorley and Jaren Johnston, is destined to become 2016’s warm-weather anthem with its energetic vibe and lyrics that perfectly capture the hope brought on by spring and new beginnings.

“It’s been cool and I’m so flattered to read people’s comments on social media about being excited to hear my new single,” Jake says with a big smile. “I think my fans have come to expect a certain kind of music from me; songs that are fun, energetic and just make you feel good. ‘American Country Love Song’ has the feeling of freedom and being young and adventurous. The first few lines of the song give examples of what love is: ‘It’s two tickets to a concert, it’s a Daytona airbrush t-shirt, wonderin’ who’s gonna kiss who first. You know what I’m talking about.’ I would say the majority of America does know what I’m talking about.”

“The single is a broad-spectrum glance in a three-minute song that describes a couple of kids living that American country love song,” he says. “But, it’s also a much larger celebration of the love story that is America itself, from cowboys and cowgirls to cheerleaders and quarterbacks in small towns and big cities. It’s the thought of, ‘Hey, let’s raise our glasses to the fact that we are all one in the same. Wherever you live in this country, we are basically living one big American country love song.”

“I read a quote last week in the signature of a publisher’s email here in town and it really moved me,” reflects Jake. “It said, ‘Be kind, gentle and loving to everyone because everyone is fighting their own kind of battle.’ I totally get that quote. Everyone wakes up with something they’re up against but music seems to be the one thing that is healing for everybody. Going through a divorce in 2015 was a tough part of my life and I’m still dealing with it, but I’m a positive person…I always have been. Some people might have expected me to record sad songs or angry songs but my heartstrings pulled me to record songs with a common thread of love and being positive and good to people.”

This unexpected common theme of love throughout Jake’s forthcoming album is exactly what inspired him to purchase a 1966 Volkswagen bus, which he has dubbed the “Love Bus.” He decided on Monday that he is going drive 1000 + miles from Nashville to Key West, Fla., beginning Saturday, March 5 to share the love and new music.

Jake just revealed the routing for his “Love Bus” Road Trip. He has always been very accessible to his fans with spontaneous Twitter invitations to join him at a restaurant or the boat dock, so he will invite fans to meet up with him along the route. (Fans can follow his progress through Instagram & Twitter - @jakeslovebus)

“I have always wanted to do this,” he says. “Let’s load up in this thing and take a road trip throughout my beautiful home state of Florida and see where it takes us and document the things that happen along the way. It’s gonna be awesome!” #jakeslovebus

Posted by LovinLyrics at 2:05 PM