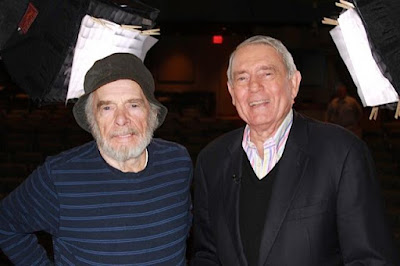 AXS TV is paying tribute Friday to one of country music’s most beloved artists, Merle Haggard, with a special airing of Dan Rather’s “The Big Interview” with Merle Haggard on April 8 at 11:30 a.m. ET/8:30 a.m. PT. There are few music artists who are genuinely considered legends. With nearly 40 No.1 hits, Haggard is certainly one of them. Haggard passed away today, on his birthday, at the age of 79.

For more than 50 years Haggard has been singing a style of country western music that he helped pioneer. Haggard rarely grants interviews but before a performance at the Smoky Mountain Center for the Performing Arts in North Carolina, Haggard sat down for an extended conversation with Dan Rather, speaking candidly about everything from his time in prison to his politics, touring with Bob Dylan, and his biggest fear in life. The episode originally aired on September 30, 2013. (“The Big Interview” episode will have additional airings on Sat., April 9 at 9 a.m. ET and Sunday, April 10 at 8 a.m. ET.)

In this clip from the show, Haggard talks about aging, death, loneliness and what kept him alive. http://bit.ly/MerleHaggardInterview

Also, AXS TV will be airing the 2004 concert “Merle Haggard-Live at Billy Bob’s Texas” as part of the Network’s tribute to the Country Music Hall of Famer on Friday, April 8 at 12:30 p.m./9:30 a.m. PT. Heralded as one of his best concerts, “Merle Haggard-Live at Billy Bob’s Texas” features such songs as “Ol’ Country Singer,” “Folsom Prison Blues,” and “Natural High,” among others. The concert airs again on Sat., April 9 at 10 a.m. ET.

Posted by LovinLyrics at 3:51 PM